The Life of Rembrandt van Rijn

On July 15, 1606 a baby boy by the name of Rembrandt Harmenszoon van Rijn was born in the city of Leiden, Netherlands. His father was a miller named Gerritsz van Rijn. His mother was a baker’s daughter named Neeltgen Willemsdr van Zuytbrouck. Rembrandt had a total of 7 siblings (2 died during infancy). By 1640, only 4 of his siblings managed to make it to adulthood.

Rembrandt was enrolled in Latin school until age 14. By then he transferred to Leiden University. Bored with his courses, he eventually left the university to pursue something of greater interest: painting. His first art teacher was a man named Jacob van Swanenburgh who lived in Leiden. Rembrandt studied under Jacob for 3 years. Rembrandt then ventured to Amsterdam to learn under another master for 6 months, Pieter Lastman, who was especially gifted in the creation of historical paintings. As well as, Jan Pynas. Under both artists, Rembrandt learned subjects such as history and rhetorical gestures.

Nothing could be more exciting and surreal for an artist to visit an area of the world where his favorite artist has lived and worked. In the fall of 2016 I had the great fortune to travel the south of France for a period of time. Most of us already know the Van Gogh life story, but actually walking in his past foot steps conjured up an emotional response for which I was not prepared.

Upon first entering the grounds of Saint Paul de Mausole in St. Remy France, a creepy vibe entered my realm that was unmistakably Vincent. This vibe immediately flooded my memory with all things Vincent, from his documented struggles outwardly and inwardly to an eerie chill ascending my spine…

Hermitage – The Museum of Eternal Splendor

There are many great museums around the world, but none compares to the eternal splendor of St. Petersburg’s own Hermitage. The Hermitage is the greatest attraction in St. Petersburg, Russia. With over three million items in its vast collections, the Hermitage houses the most impressive display of art and antiquities. Part of the exquisite charm and splendor of the museum is not only the collections, but the buildings themselves that house the collections. The Hermitage is made up of five interconnected buildings. The largest building, being the Winter Palace, did house the Romanov Tsars from 1762 until the revolution in 1917.

The art collection was started by Catherine the Great in 1764 when she officially made her first bulk art purchase. It has been augmented since, and houses great artist’s works like Rembrandt, Reuben, Matisse, Picasso, and Gaugin. With a world-wide collection, you can find an impressive display, from the entire global reach of art.

How to design your own dance studio

For a lot of dancers and dance teachers designing and opening their own studio is something that seems like and impossible goal. However, once the day comes that you finally gather the courage and rent that space the fun part begins: the part where you get to put your stamp on the building. Your studio wouldn’t be yours without it looking just how you wanted. So, if you’re in need of a bit of information regarding the technical bits, you’ve come to the right place. Here is some necessary information you’re going to need while you’re designing your new studio:

When it comes to casinos there is usually more to them than the gambling. In many cases, you will find that some casinos feature art galleries, where famous paintings and works of art are showcased as part of their tour. While there are various myths regarding the way casino-hotels keep their players within the walls of the casino and other myths about the games which can be seen in the Ladbrokes blackjack myths guide, the accessibility and abundance of incredible art that you can find featured at one of the famous casinos around the world is not a myth at all. Bellagio, Las Vegas One of the most notable is the Bellagio in Las Vegas, which is home to the gallery of fine art. This is a premier exhibition space and has featured works of art from some of the…

Article by Dennis Jarsdel and Vladimir London One of the founding members of Peredvizhniki, a group of Russian realist painters the great Russian artist Vasily Perov was born in 1834, in the town of Tobolisk in today’s Siberia. Perov was the illegitimate child of Baron K. G. Kridiner, the provincial prosecutor for the region of Arzamas, 410 kilometers (250 miles) east of Moscow, and his later wife. Due to his illegitimacy, Perov was given the surname of his grandfather however the artist disliked it, opting for the name Perov, derived from the word “Pero” meaning pen. The name was suitable as Perov had articulate skills in calligraphy. Perov received his first formal art lesson at the age of 12 at the Alexander Stupin Art School in Arzamas. Stupin was a painter of the classicism genre, whose school was the first…

When I was young, I saw an illustration on the cover of the Mexico geography book – the painting of a landscape dominated by a train that was moving trough a countryside, it was charming and neat…

Manuscript illuminations, also know as miniatures, are a form of art, the decoration of books and texts and especially margins and initials.

The word illumination comes from the usage of gold and silver leaf in these decorations and the Latin word illuminare, meaning ‘light up’… 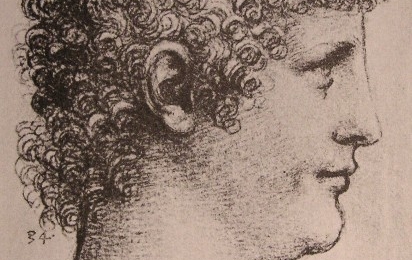 Born in 1480 Vimercate Italy, Gian Giacomo Caprotti da Oreno, better known as Salai was a pupil of the Renaissance master Leonardo da Vinci. The nickname Salai meant ‘The Devil’ or ‘The little unclean one’. Although not many people know about him, Salai was an important part of Leonardo da Vincis personal and artistic life.

The son of Pietro di Giovanni, the tenant of Leonardo da Vinci’s vineyard near Milan, he joined Leonardo’s household and became his assistant at the young age of 10. Although he was taken in as a youth he stayed with Leonardo for the rest of his life, almost 30 years. At some point it’s safe to say that they became more than pupil and teacher…