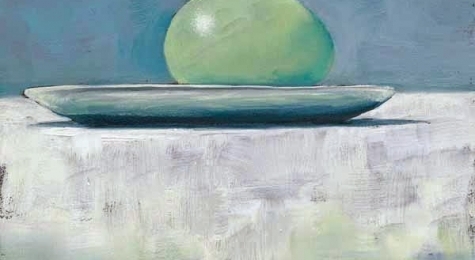 The Highlight is not the Spotlight

Okay, you cool arty dudes! I came across some common mistake, a presumption a lot of you artists tend to make: Take our showgirl- the egg- how many of you confuse or differentiate between, the centre light and the high light ‘of her per-form-ance’?.

The Artist Transcends Within

Article by Anna Kotze When we look at the world and observe all there is to see, within its boundaries, it feels as if we are observing a world that is happening ‘outside’. We are observing things that are happening around and above from where we are standing. The truth is, that everything we observe is happening inside of us….

Victor Koulbak is best known for reintroducing the technique of silverpoint to the art world. This drawing technique takes its origin in the Renaissance time and now is almost forgotten.

Victor was the second-born child in his family. He was born on March the 12th, 1946 in Moscow, Russia. While his father was employed as a pilot in the Russian military, his mother was content to stay home and raise their children. It was Victor’s mother who first took notice of his capacity in regards to drawing, and she who brought him to the Academy of Fine Arts located in Moscow; here Victor was employed at study for the full four years. He later recalled those years with fondness: “There, we were taught the arts. The method of teaching used was most classic. We were held strictly to only one standard – accuracy. I liked it, and I was happy.”

“On a regular basis, the choicest work was posted in one window on the street. On the first occasion that my work was posted, I was very proud, and brought my mother and sister to see it. They were pleased with my success. They were outraged however, when on another occasion we found that the window had been broken and the singular posted item- mine- was stolen. It was for me though, my first of accomplishments.”…

Article by Article by Juhi Kulkarni Raja Ravi Verma was one of the most celebrated realistic painters of India. His grand oil paintings of India’s ancient glory, delighted turn-of-the-century India and his mass reproductions through oleograph reached out to the Indian population in an unprecedented scale. He was born on 29 April 1848 – 5 October 1906) was an artist…

Reply to T. Stonefield’s ‘How I got my art back’

Thank you ‘T’!. I found your article “How I got my art back” really helpful and inspiring.

I never studied art formally apart from a brief 6 week summer school 20 years ago, which hindered rather than helped me due to its focus on expressive methods and the short time spent actually learning to draw – the first 2 days in total! I think that experience put me off really, but like you the ‘something missing’ thought kept recurring. My dad was a typographer and graphic artist who taught me lots about drawing, but although much of it became ingrained in my subconscious, I was too ‘lazy’ to really spend any significant amount of time putting what he taught me into practice. I suspect that the ‘laziness’ was a form of perfectionism masked as procrastination – ‘I can never be as good as the artists I like so it is better not to try.’..

Eight Great Classical Female Nudes from the Past

Since Paleolithic times, the female nude body represented The Great Mothers or the Venus as we know them. She was with a large head and voluptuous body and seldom had any limbs, her sexual organs were depicted unashamedly and were worshiped too. Women being the object of worship, the one who bears fruits of progeny, was not just a celebration of beauty but also a stratum of more concealed and profound meaning…

An article to understand Vincent Van Gogh through his letters and observational drawings of particularly trees.

Vincent Van Gogh’s reverence as well as gratitude towards nature is apparent throughout his letters illustrated by drawings. Amongst the thousands of drawings Vincent did, trees fascinated him since early 1875 , as his art pursuit began from his mid twenties, leaving lasting impression on his life leading to most profound understandings and erudition. “Post was his main communication with the world outside. His charm, and intellectual power – which comes through so strongly in letters – functioned better at a distance…

The Gift of Art

Story and drawing by Jack Fischer

Art came alive to a dyslexic, low-self esteem boy that needed direction. At an early age, I had a gift for drawing. My eye and hand worked in tandem tracing objects and images in a very short time. On cold, wintery days I would lose myself copying National Geographic pictures. Living in Chicago, my mother and I would visit the Art Institute and enjoy seeing Van Gogh’s Starry Night and Rembrandt’s portraits.

Upon graduating from high school I went on a European trip to see the Masters paintings of Leonardo’s Mona Lisa and Michelangelo’s Sistene chapel ceiling. I was awestruck at the realism of Leonardo’s Mona Lisa capturing her facial expression, skin tones and her eyes. Why it looked like wherever I stood her eyes followed me. “What was she thinking? Was she in love?” To think this painting was over five hundred years old. When I walked into the Sistine Chapel my senses came alive.

Two years after graduating from Indiana State University as an All American gymnast, I was practicing for the AAU Championships and was paralyzed from the neck down doing a double back flip off the parallel bars. I was suicidal without hope until I saw quadriplegic, Joni Eareckson using her mouth to hold a paintbrush. Her talent was still there despite her disability. I said to myself, “if she can draw, so can I.” …

Returning to the Cincinnati art museum, the first Sunday of February, I began this drawing, the second study of Roudolph Rogers, ( 1825 – 1892 ), ” Nora “, { Marble }, an opportunity offered museum members and guests who enjoy drawing and are offered the first Sunday of each month the whole museum to study.

I wrote a short description of my first drawing, and submitted it to the Online Drawing Academy in January. I reported that I intended to return to the museum and attempt this second study, hoping to catch more detail of the work by standing nearer. I did move a number of times, as I anticipated I would need to as other viewers passed, and I did not get as far into the study as I had hoped that day…

Once a month at the Cincinnati art museum

Story and artwork by Steve Smith

Any of us who have the opportunity to visit an art museum are fortunate, and I have been very fortunate to have seen a great many museums in my lifetime. Near me, the Cincinnati art museum has every day free admission, and a lovely collection. Visiting this year, for the first time in a while, I became a member. It is unlikely that we would have such treasures as these museums without sponsors, and now that I am retired I have the time to visit more often, and some means to contribute my support…