When did the history of art start? The simplest answer is: the moment people started to create art.

It has been assumed for a long time that the earliest form of art is only 45.000 years old and dated from the time of the Homo sapiens. These modern men came from Africa and were able to express themselves in images and symbols, witness the many figurative and abstract art forms from the late paleolithicum (40.000-10.000 BC)

Due to the traditional view that art should be a representation of nature and could only be created by modern man, we overlooked for a long time the art of older mankind.

Both statues are cataloged as Venus Art.

What is Venus Art?

Venus Art is a pre-Christian sacred feminine art that has to do with life, death and rebirth. The term is based on a misunderstanding, as so often happened in the history of art.

In 1864 archaeologists discovered in the Dordogne a small statue, barely 8 cm high. A young girl is cut from a piece of ivory, with no arms or head, but with a clear vagina. She got the name Venus Impudique (the shameless Venus).

At that time naked women where a shame. Except for divine topics like the mythological goddess Venus, who was born from the foam of the sea and therefore could be portrayed naked.
When the statue was found they concluded that only women of light morals would so openly show their genitals. So this girl must have been the prototype of Stone Age porn. This puts the tone: from now on naked women statues from Stone Age were called Venuses, though they were not a representation of the mythological Venus, for the simple reason that she did not exist at the time mythology was created, not even a barbarian variant of it.

Another example is the Venus van Hohle Fels represented to the world in 2009. It was founded in the cave of Hohle Fels near Ulm (South Germany). Only 6 cm and dated 40.000 years ago.

Very accentuated are the female form like breasts, belly and vagina. The Venus from Hohle Fels was represented to the world as a pre-historical pin up, the play mate of the year, a sex toy for men. These statements say more about the male gaze than about the real meaning of the statue.
Therefore we have to look to pre historical art through the glasses of the time context and not with the eyes of modern thinking. We have to understand their way of living before we can interpret their art form.

People in the late paleolithicum were hunters and collectors. Men were hunting and women collected seeds, hunted for small animals and took care of the children. The groups were small and socially in balance. Between the sexes existed equality and the tasks were divided according to their physical ability. When the group balance was lost, due to disease, trauma or violation of taboos, the shaman restored the balance. The shamanistic way of living is lost in history but we can reconstruct it, because there are still shamanistic societies alive, for example in Siberia.

For scientists who presume that Venus figurines are a pre-historical form of pornography it is normal that they ascribe them to male artists. But if we take into consideration that the pre-historical tribes where egalitarian it is not so normal anymore.

On the 13th of July 1925 the oldest ceramic statue was discovered: the Venus of Dolni Vestonici ( South Moravië, Tsjechië). It is dated from around 27.000 BC, only 11 cm high and made of bone-dust and loam. A few years later, on the same spot, they found a grave with a skeleton in it. It was obviously not an ordinary person. Near the head they found a spearhead and in the hand of the deceased a fox. The fox was for a long time in the shamanistic culture the symbol of power. So archeologists presumed that this body should be a shaman. Great was the surprise that it turned out to be a woman. Until now shaman where considered to be men, that some of them were female was almost unthinkable. In the fifties archeologists discovered ceramic ovens near the tomb. They were filled with more than eight hundred clay works: hands, feet, heads, figurines of people and animals and more than 2000 little clay balls. These clay works where probably intended for shamanic practices. Outside the ovens they discovered a ‘portrait’ of a woman, probably the woman from the tomb. This portrait was made of mammoth ivory. Could it be possible that the female shaman was also an artist?

This all means that the oldest skeleton of a shaman is that of a woman, not of a man. Also the first one we know of, who made figures out of clay and baked them in an oven. Therefore this woman could be considered as the inventor of ceramic art.

Paintings in the Stone Age

When people lead a nomadic existence, it’s obvious that their artworks are small and portable: mobile art. But due to a milder climate, more permanent settlements emerged. Proof is found in cave paintings in the south of France and Spain. 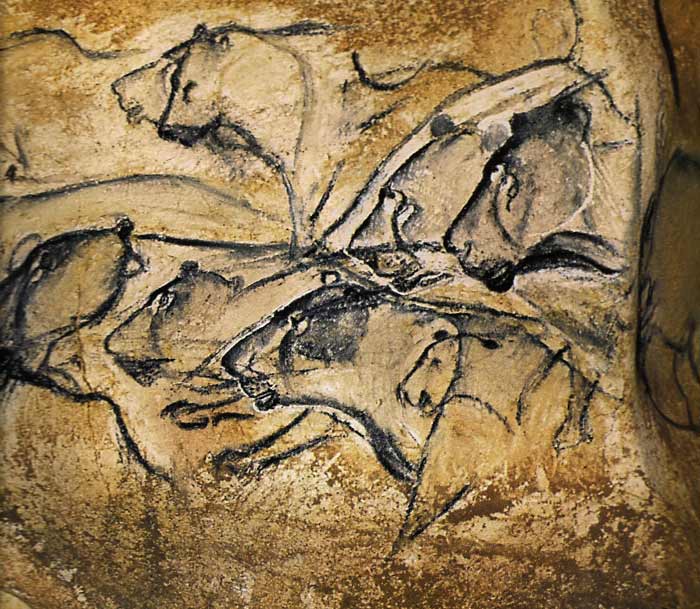 A persistent 19th century theory states that these paintings refer to hunting. However, we now know that the main source of food for the Stone Age man was the reindeer. If these were hunting scenes surely reindeer would be depicted, but this is not the case. Instead wild horses, bears, mammoths and lions are depicted. Some of them seem pregnant. So like with the Venus Art the main theme is the cycle of life.

Another equally persistent argument is that these paintings were made by men. It was assumed that the hands are the hands of men. Recent research has shown that this is not always the case. In most cases, the hands of women and sometimes even children appeared, proving that not only men were active as artists.