The writer, the composer and the painter: Sand, Chopin and Delacroix

Aurore Dupin did not behave as other women did. She liked to wander through the Parisian salons dressed like a man, smoking cigars and since her divorce, she had taken several lovers. When George Sand, the pen name by which she is best known, laid her eyes on pianist and composer Frédéric Chopin, she set out on a mission to possess him.

Since he was 16 years old, the Polish virtuoso had been sick with tuberculosis, an illness that had not only taken the life of his younger sister Emilia back then—and would also lead him to his early death at 39 years old—, but had also shaped his character, being introvert and reserved. The melancholy by which he is frequently characterized was only a part of his complex personality; otherwise, the energy he lacked in his body, was present in his —at moments— impetuous music. It does not come as a surprise that a person like Chopin (who is said to have avoided Sand at first) would feel ‘repulsed’ by her. Still, as they moved around in the same circle of acquaintances (which included the Hungarian pianist and composer Franz Lizst and the French writers Victor Hugo and Honeré de Balzac among others), they met in 1836 and became lovers two years later, under unknown circumstances. That year, Sand introduced Chopin to her friend —with whom she shared her passion for Shakespeare and Lord Byron—, Romantic painter Eugène Delacroix. 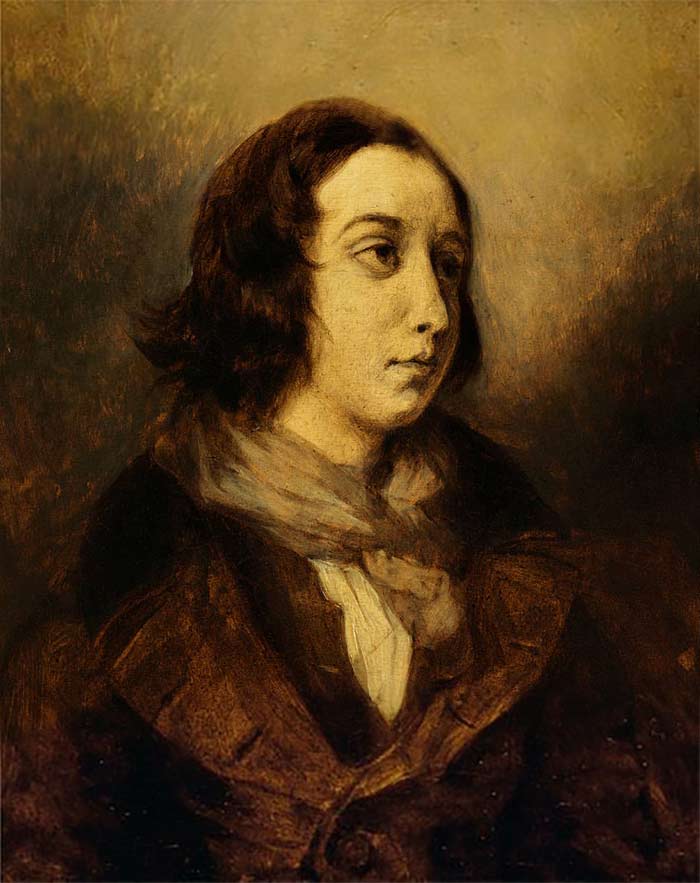 Sand and Delacroix had known each other since 1834, when the painter made a commissioned portrait of her, meant to illustrate a magazine article. In spite of their political differences, their passion for art and poetry was suffice to maintain their friendship; they also shared their admiration for Chopin, as Delacroix said, ‘He is the truest of artists that I have had occasion to meet in my life. He is one of those rare individuals whom one can worship and admire at the same time’. But according to Sand, even though he respected Delacroix, Chopin could not return the favor. It is suspected he was not very keen on Delacroix’s art as in a letter to his family, he wrote highly of the masterpieces at Stafford House (now Lancaster House) and regretted that Renaissance artist ‘Paolo Veronese could not see such spectacle, so that he could have painted one more masterpiece.’ Nevertheless, he did say of Delacroix, ‘He is the most admirable artist imaginable, I have had delightful times with him’. 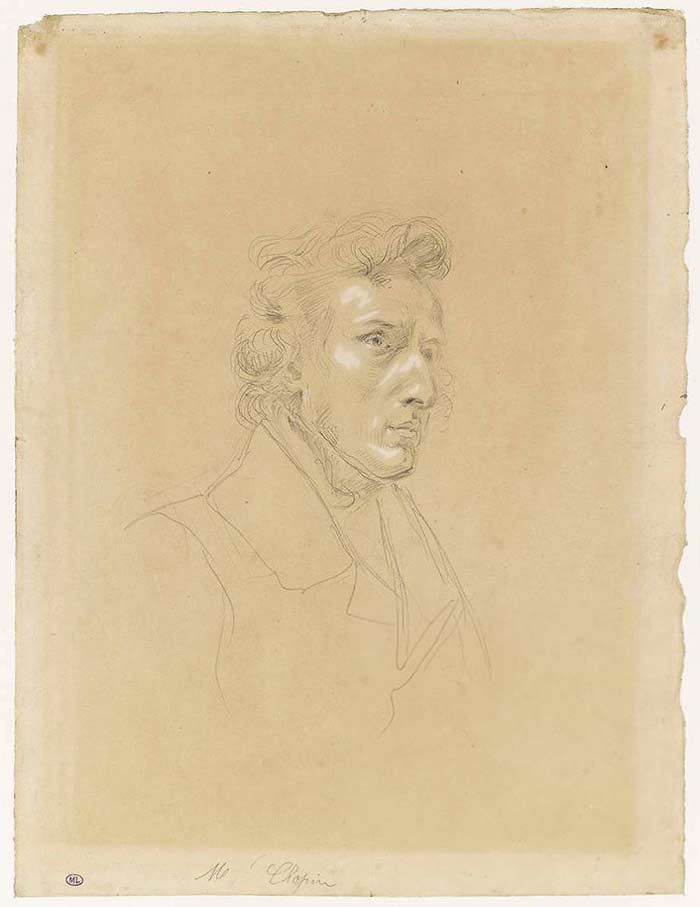 That same year, Delacroix also made an oil painting of the couple: Chopin playing the piano and Sand, by his side, reacting to the music. As other works by Delacroix, it emphasizes color and movement rather than preciseness of line —a technique that would later influence the Impressionists. The painter borrowed an upright piano to paint the portrait in his studio, but never got to do it; the work remained unfinished. 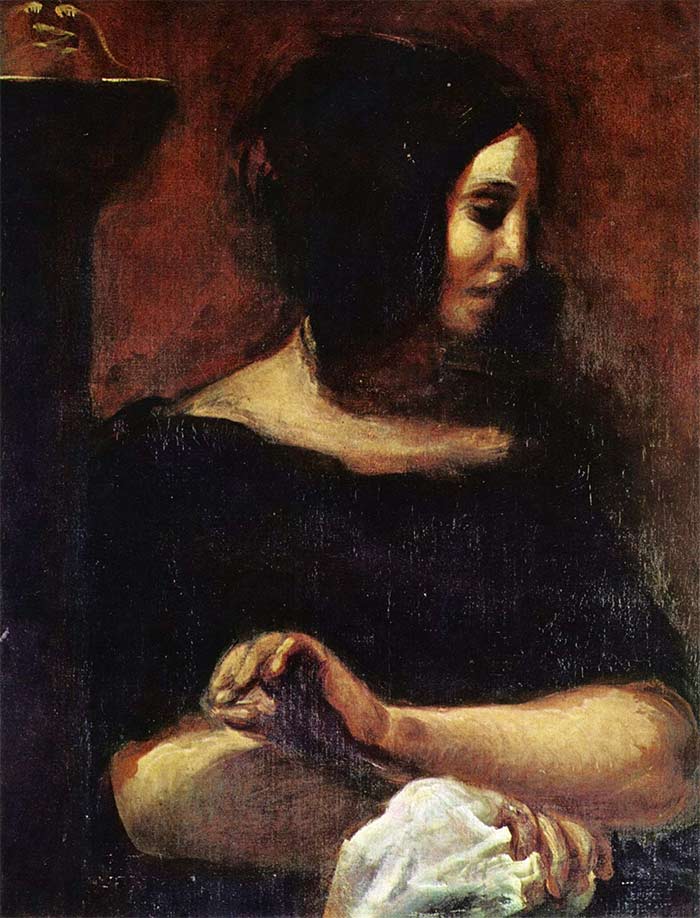 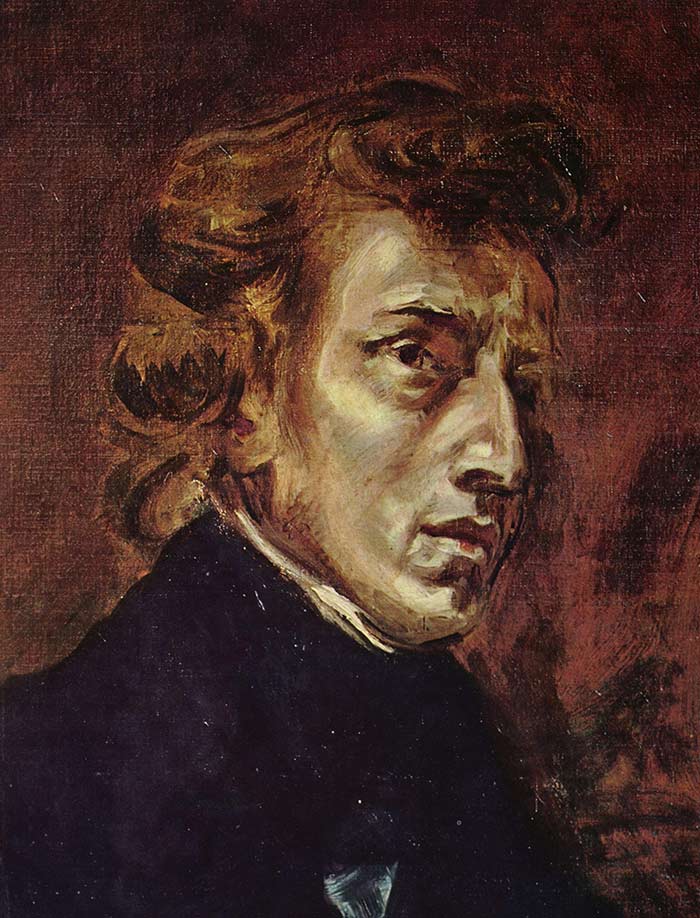 Nearly ten years later, Sand and Chopin parted ways feeling resentment for each other, and during the last two years of Chopin’s life, hardly ever spoke to each other. Delacroix on the other hand, continued to be Chopin’s friend until the last moment; visiting him everyday on his deathbed. Upon the composer’s death, Delacroix was among the friends who paid for his funeral and was also one of the pallbearers. Sand did not attend.   Delacroix drew a sketch soon after Chopin’s death, posing him as Dante and inscribing at the botton ‘cher Chopin’ (French for ‘dear Chopin’). It is suspected his earlier Dante in the ceiling of the Library at the Luxembourg Palace in Paris was painted after Chopin as well. 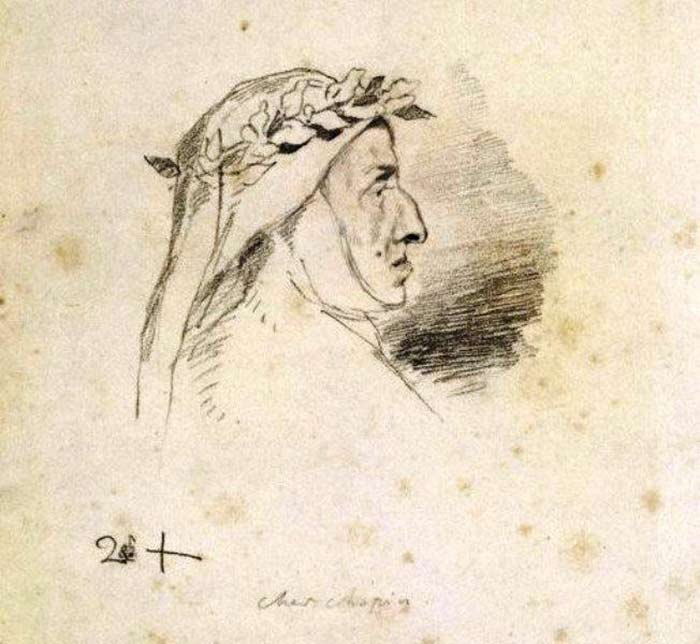 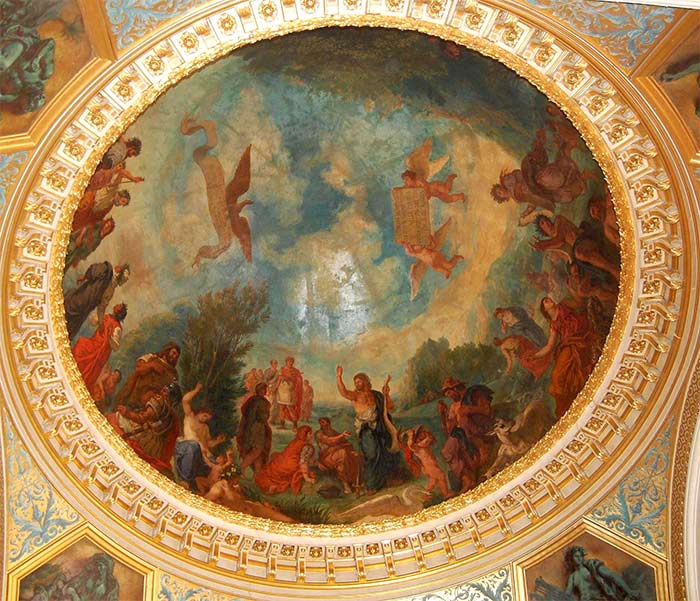 Sand and Delacroix also remained friends, until the painter’s death in 1863. Afterwards, his unfinished painting of the writer and the composer was cut in two (disposing some sections, now lost). It is uncertain who or when did it, but it is believed it was done to increase its value. As the lovers themselves, the painting’s parts also ended estranged: Chopin’s side is in the Louvre and Sand’s in Ordrupgaard-Museum at Copenhagen.