Not much is left from Claude Monet’s first wife, Camille Doncieux: just one photograph, official French documents and the paintings that have immortalized her. After her premature death at only 32 years old (it is unknown whether the reason was a malpracticed abortion or cervix cancer), the painter destroyed her family photographs and all the correspondence she had ever written or received. The surviving photograph had been taken in Amsterdam in 1871, and it was saved only because Monet did not know about its existence. Nothing else was left from the woman he had married in spite of his family’s disapproval; the woman that had given him two sons. According to the art historian Daniel Wildenstein, his second wife, Alice Hoschedé, consumed by jealousy, was the one to blame for the damnatio memoriae (condemnation of memory) that was imposed on Camille. 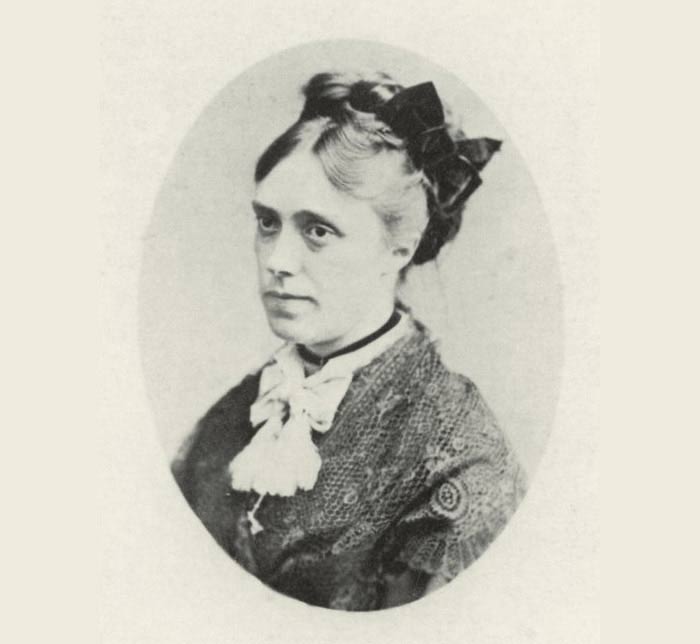 Camille came from humble origins, and had met Monet when she was eighteen years old, while modeling for him and other Impressionist painters. Soon, she had become his favorite model and also his lover. ‘Luncheon on the Grass’ was one of the first paintings in which Monet painted the female figures after her. The painting was done after Édouard Manet’s homonymous work — which had been banned from the salons for being, what was considered at that time, ‘obscene’—, which in turn, had been inspired by Marcantonio Raimondi’s engraving ‘The Judgment of Paris’ (after a drawing by Raphael), and The Pastoral Concert —whose authorship has not yet been determined between Titian, Giorgione, or both of them—. Monet wished to challenge Manet, with whom he was often confused, reason why he had to sign his works with his surname and name. Although he initially made a smaller version of it, his plan was to present a large-scaled canvas of 4 by 6 metres in the 1866 salon. As he was not able to complete it in time, Monet ended up leaving the monumental painting unfinished (later on, due to the mishandling of the painting by his landlord, some parts went mouldy and had to be cut out). Instead, he submitted another painting also using Camille as a subject, ‘The Woman in the Green Dress’, which was highly praised. 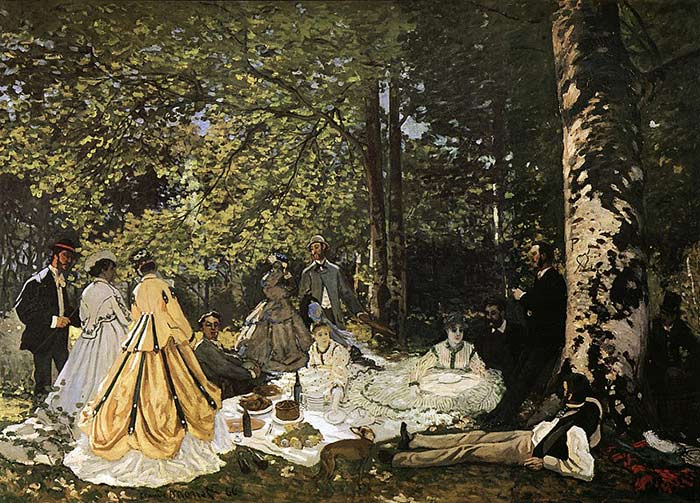 Monet, Claude. Luncheon on the Grass, 1865-1866
The smaller version shows what bigger version looked like before being cut 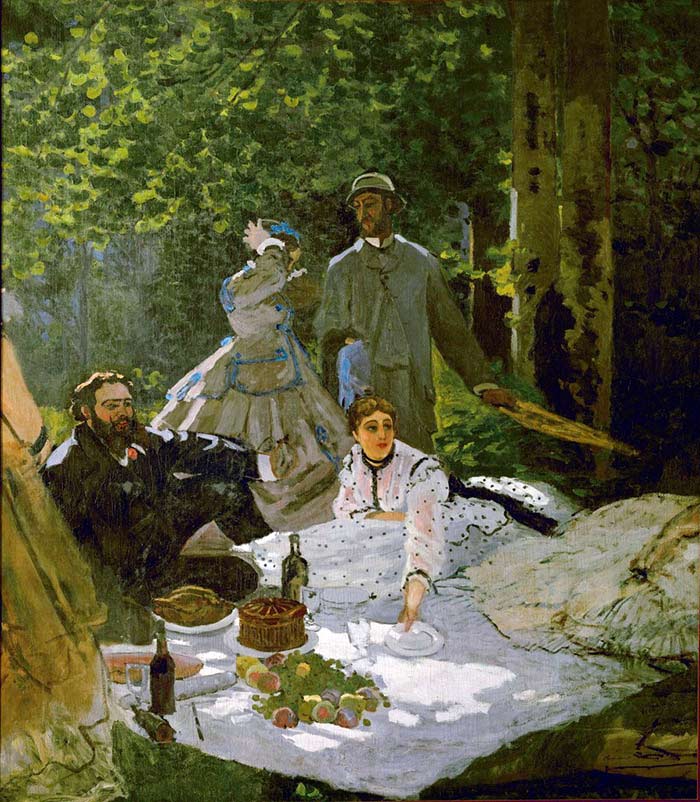 Monet, Claude. Luncheon on the Grass, 1865-1866.  Middle section of the large-scaled unfinished version 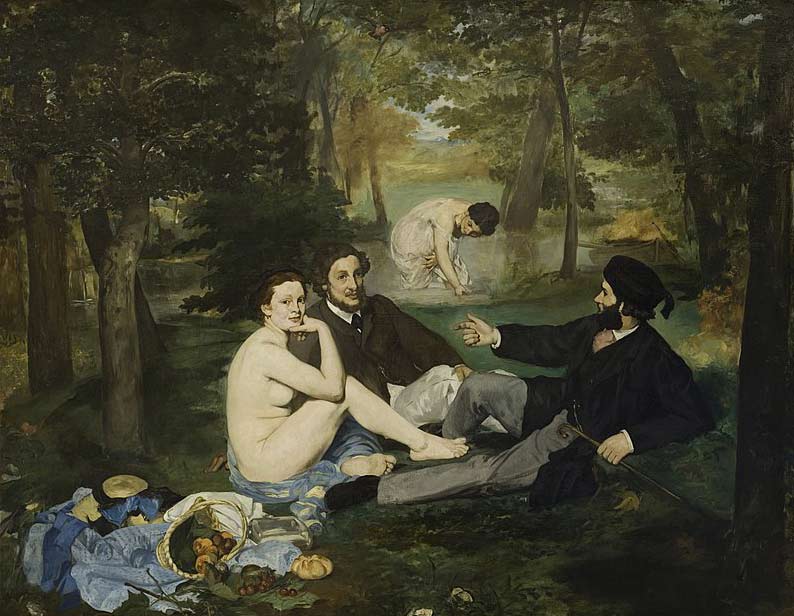 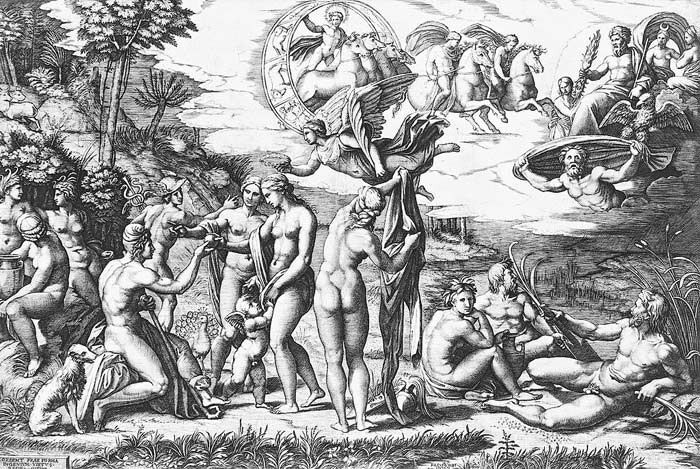 Raimondi, Marcantonio. The Judgement of Paris, ca. 1510-1520. The disposition of Manet’s characters is undeniably the same as the ones in the lower right section of the engraving 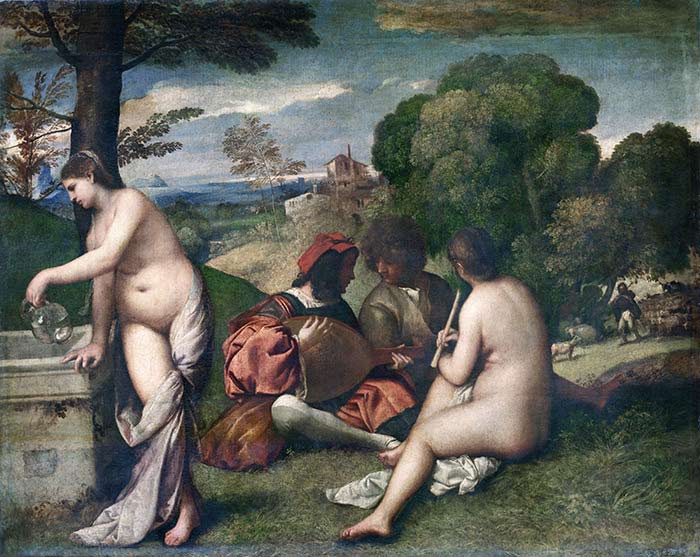 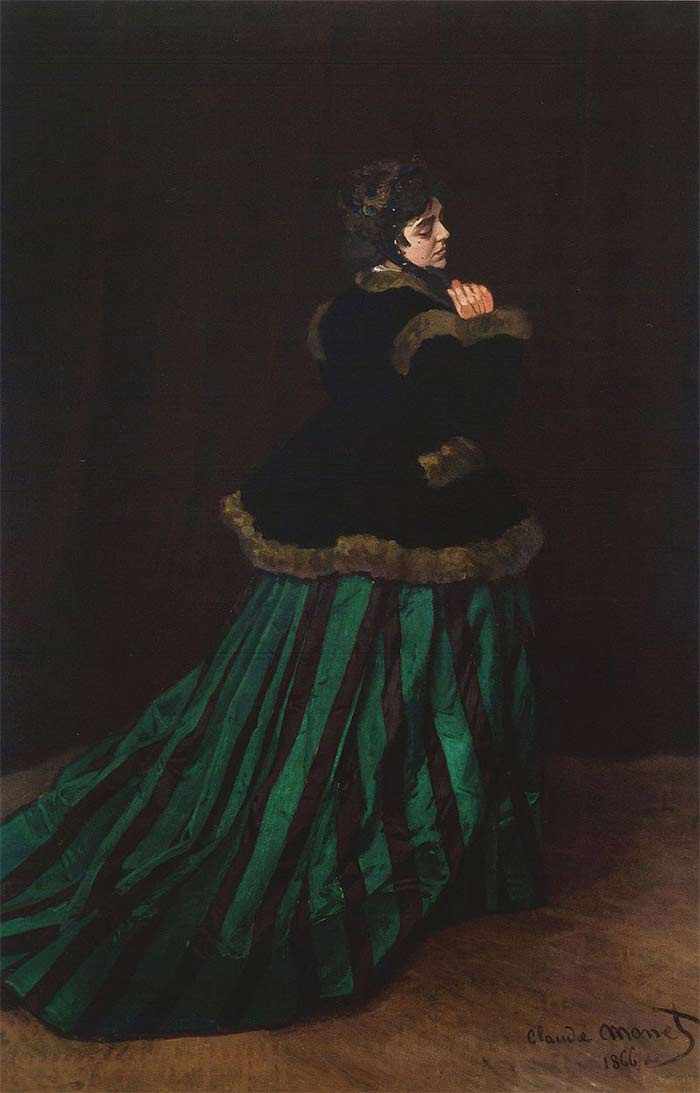 In spite of having sold the ‘The Woman in the Green Dress’, money was not enough, and the couple lived in poverty, often aided by friends such as painter Frédéric Bazille. Monet started working on his next salon presentation, ‘Women in the Garden’, with Camille posing as the three women. The painting was rejected for the use of large strokes —considered by the judges an inappropriate practice, that needed to be stopped. 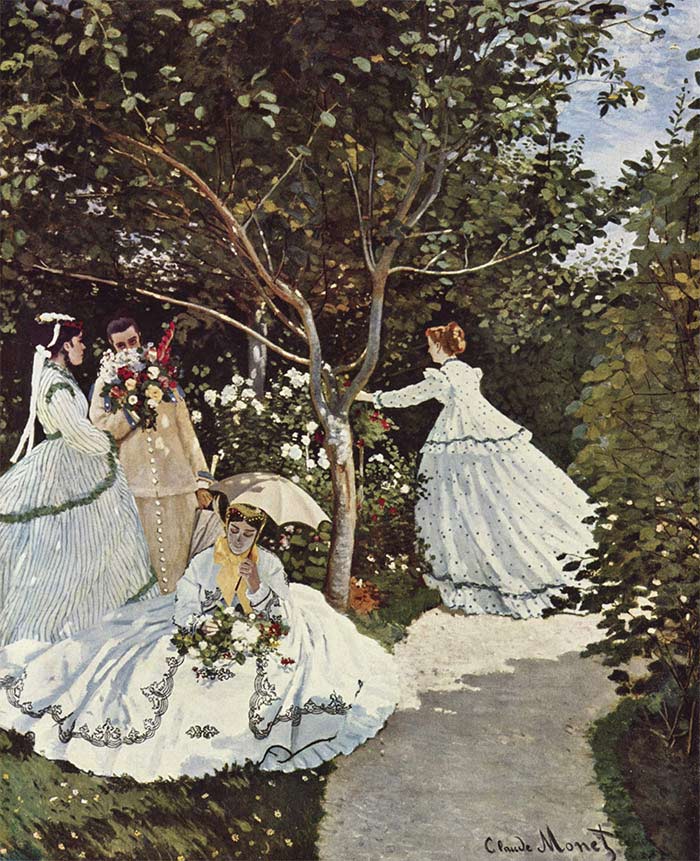 Upon Camille becoming pregnant, Monet’s father and aunt lured him with financial support in exchange for abandoning his mistress and illegitimate child. After several months of living in his aunt’s house, Monet went to meet Camille and their son, Jean Monet, thus losing his family allowance. Camille and Monet married on 1870 and moved to Argenteuil in 1871. Three years later, Manet, who was vacationing in his family house across the river Seine, frequently met with Monet to paint en plein air (outdoors). On one of this occasions, both him and Renoir —who was staying at Argenteuil at that time—, painted the Monet family, although this was not the only time they used Camille as a subject. 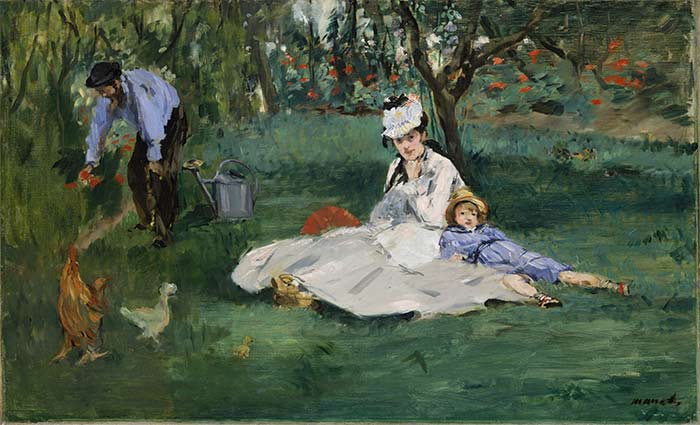 Manet, Édouard. The Monet Family in Their Garden at Argenteuil, 1874 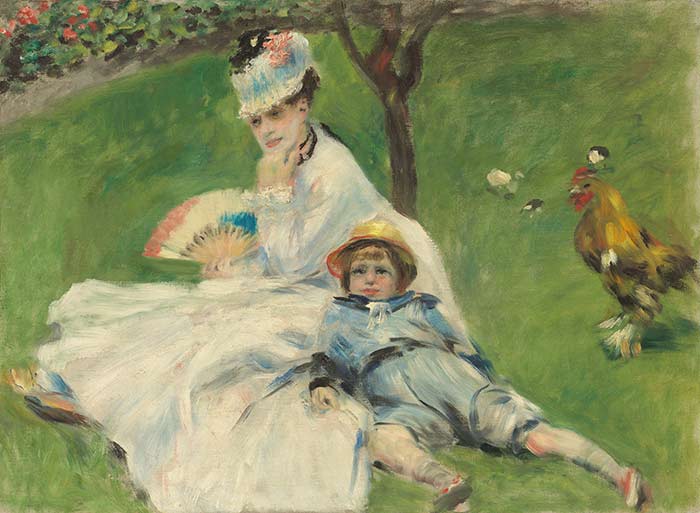 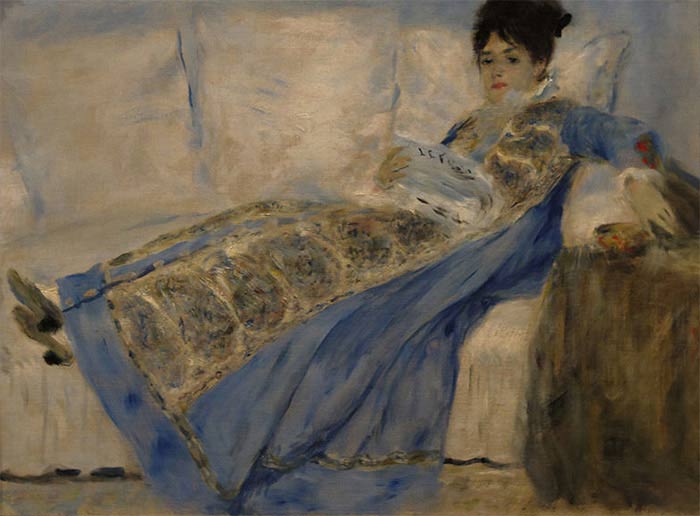 Monet, fascinated with the Japonism that had invaded Europe in the late-19th century, painted his chameleonic wife dressed in a traditional Japanese costume and wearing a blonde wig to emphasize her European ascendant. The large-scaled painting sold in the second Impressionist exhibition but failed to pay in full the accumulated debts. ‘Woman with a Parasol’ was also presented at that time, which was done en plein air using fast strokes, and focused on the light filtering through the moving clouds. The painting, which John Singer Sargent saw at the exhibition, inspired the American artist to paint ‘Two Girls with Parasols at Fladbury’. 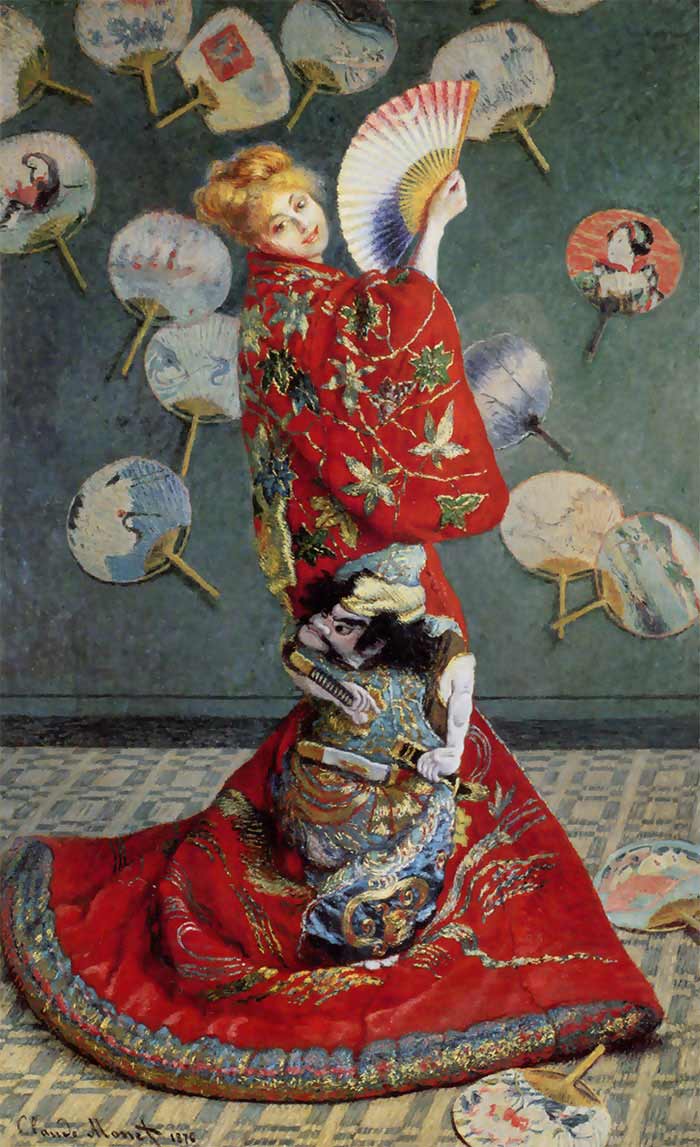 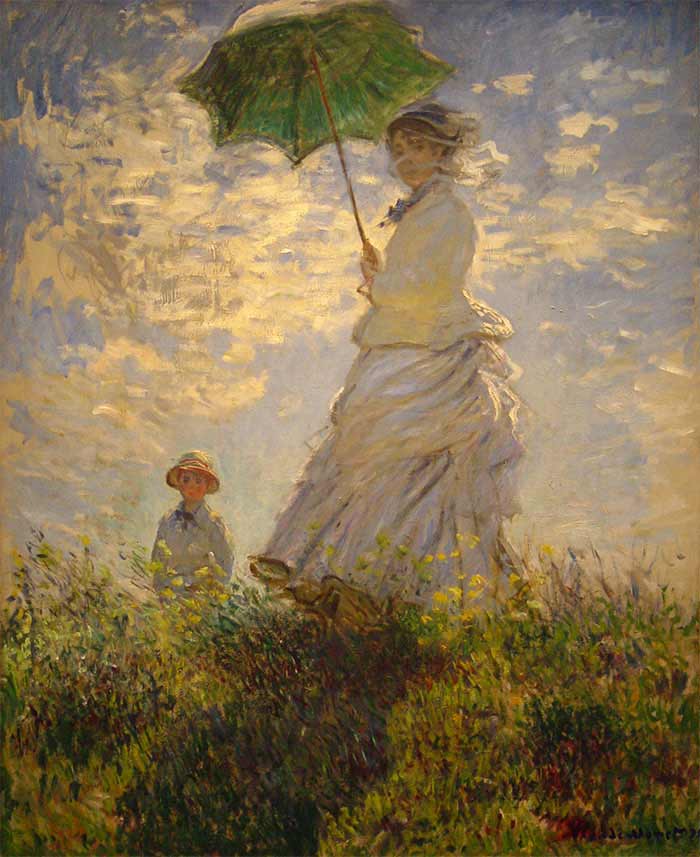 After the birth of their second son, Michel Monet, Camille’s already debilitated health worsened even more. She died on 1879, never knowing her husband’s success. Appearing in at least 34 paintings by Monet —one done posthumously on her deathbed—, and several others by Manet and Renoir, her memory will always be kept as the great muse of Impressionism. Perhaps the only version of her that Monet thought was worth remembering.