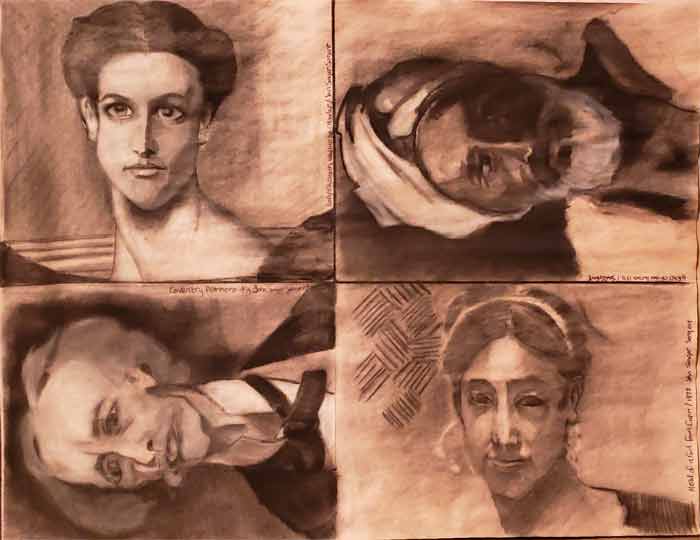 “If you don’t have a solid foundation to build upon, your ideals will fall”
Fundamentals of the game TETRIS

I started my interest in drawing in the fourth grade. I loved the process, and the freedom to create. As I got older, I didn’t see much progress or direction in my ability, which frustrated me and I would go for long periods without drawing, not knowing why. As years past when I was bored I would gravitate towards drawing, which I found comforting. Occasionally I would produce a good picture or 2, which would encourage me. I always stumbled on the basic’s though, lacking the skill or knowledge to make objects look three dimensional. These skills for some reason were not taught in elementary, Jr. High or High School. The basic elements of line and form, to space and value. I could copy well enough, usually the outline of an individual or object which would look reasonably alike, but always struggled in depth.

My education in ‘art’, also didn’t seem to really help in building those foundational techniques that I felt I needed. With knowledge and Hine site, I feel the art education that I received was geared towards teaching a “free-form” method, so as not to be held accountable to any higher bar. Draw what you “feel”, without the knowledge of “Form” first. I feel, this was the response, to the decline of standards, that were set from the golden age till the Impressionist’s painters who challenged old standards. Moving away from tradition, away from many of the norms, that threatened many of the social constructs, that were beginning to deteriorate. From high school I went to the local community College. I felt the instructors, especially the drawing instructors, acted like their students would have or should have learned all the “basic fundamentals” of drawing; hatching, cross hatching, stippling, blending etc. in order to convey light to dark already. I hadn’t, and I felt like one of those lost souls, who must have missed that class, or that semester, because I didn’t understand it, nor was able to produce it, so I dropped out, discouraged.

After languishing for 7 years, with no direction, I enrolled again into a state college. I hoped that going to college again, I would find my way. The idea of going to college would lead the way to a good paying job. I was initially excited in having a new direction in life, one that also incorporated my artistic ability, as I enrolled in the Graphic Design program. After the second year though, I started working in the format for graphic design, which involved computers, and I hit the perfunctory wall. I am a ‘hands on’ artist, willing to work on…?? story boards or conceptual drawings…? I didn’t know, but the idea of spending my days tied to, incorporating my ideas on to, or into a screen, was unthinkable. I left that department, only to stumble into the painting studio, and an epiphany happened, which I can only describe as going back in time. As I finished the rest of my “education”, wandering as a painter, the same method of “free-form” teaching seemed to envelope this school as well. Students were just set free in the pasture to create whatever they felt like. It wasn’t until my Senior show that I realized that the institution I was paying to teach me the skills I needed to use, really had left me, to make it up. I was, proud what I had created, but disappointed again, in my lack of some the basic skills. I realized then that I would have been better severed at an Art School. An institution with a structured outline, and teachings that made sure their students understood and could produce the basic techniques. After my Senior show I walked away again, feeling let down, with the typical delusion students get after graduating college, under prepared and in debt. Life kicked in again and my art goals got set aside.

Jump forward to today, 22 years later, married to a wonderful wife with two beautiful sons, living paycheck to paycheck, with still the burning desire to create. My oldest boy mentioned to me, for my happiness, that I look inti going back to my art. This hit me, the truth staring me in the face; of course. Focus on learning what plagued me, always the elusive basics that I never really comprehended. After looking on You tube for lessons, and attempting some, the Drawing Academy appeared, and what felt like serendipity again. What I was looking for, an online institution that taught the classical techniques, that didn’t involve a massive debt.

I would Love to be one of the winners to gain access to your knowledge, to fill in all the gapes that had held me back so far. The chance to once again, build the solid foundation that every artist should have, in order to build off from. Even with your rates so low, currently I don’t have the means, nor the social network to vote for me to win, just my submission and my story.

Thank You very much, for considering me
Derek M. Adams

I want to win this Competition and I need your help!

Please vote for me by sharing this page using buttons below:

Learn How to Draw Whatever You See or Imagine

Get Your Free Instant Access to Drawing Video Lessons