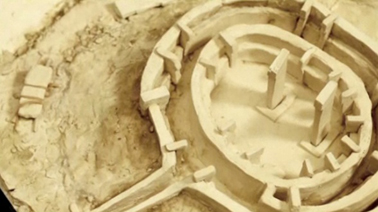 In the history of prehistoric times one makes distinction between the old and the new Stone Age. Both in the Paleolithic and the Neolithic age people made use of stone tools, hence Stone Age. The big difference between the two is that during the Paleolithic, people mostly were hunter-gatherers whereas in the Neolithic age agriculture arose. This evolution has everything to do with the climatic changes by the end of the great ice age. As a result of the more fertile land, it became possible to stay longer at the same place.

During the Old Stone Age, plants and crops were the business of women. It were probably women, who in the proximity of their settlement, took the first steps towards agriculture. And they just kept doing this in the new Stone Age.

It is assumed that South East Turkey (around 10000 BC) is the birthplace of the farming cultures.

Proof of this can be found in Göbekli Tepe, the oldest temple in the world. This site in Southeast Turkey was discovered in 1994 by the German archaeologist Klaus Schmidt. In the lower layers, from the 10th Millennium BC, he discovered a round structure decorated with all kinds of animals like lions, snakes, foxes, gazelles, water birds and reptiles. Because the lack of houses, fire places and remains of people, it is generally assumed that this building must have had a religious function. There are also references to Paleolithic cave paintings and from there to shamanism.

Interesting is the theory of Schmidt is that the oldest layer was built by hunters/collectors and that the people who built this large-scale project needed to have an alternate food supply. People cannot build and gather food at the same time. So they started to cultivate the wild cereals that grew in close proximity. The area around Göbekli Tepe must have been paradise at that time. It is no coincidence that this area between Tigris and Euphrates is the historic cradle of the Bible story.

After 8500 BC the climate changed and the paradisiacal environment went away. Some people immigrated into Western Anatolia. Others remained, and with the absence of hunting opportunities men turned to the domestication of animals. This marked the birth of the shepherd culture.

As a result of the lack of food and because people became used to dominate animals, a dominant male culture arose from this shepherd culture, with male gods prevailing.

The transition from an egalitarian society to a dominant one

At the beginning of the 9th millennium BC there was mainly agriculture, but by the alternation of warm and dry periods and by the absence of large wild herds of livestock the shepherd culture, from the 5th millennium BC on, became more dominant. This was the case in the Middle East. In other areas, such as in Eastern Europe (Danube culture), South Asia (Indus civilization) and Anatolia high quality egalitarian civilizations developed until they were swept away by more dominant cultures.

Egalitarian cultures focused on the maintenance of their own society, without focusing on expansion. Dominant cultures are characterized by hierarchy, a central authority and expansion. The latter have finally conquered the world through wars and because, from the 4th millennium BC on, they used the scripture to proclaim their vision of life. That this dominance ultimately leaded into the degradation of the female image is usually not mentioned.

From Mother goddess to a God creator

With the social changes in the new Stone Age also came the necessary political and religious changes. Despite the fact that no one could say this for sure, one can deduce some information from the mythology. In general, one can say that in egalitarian farming cultures mainly (terrestrial) goddesses were worshiped, in which the female life-giving symbol stood central.

In shepherd cultures we mainly find (heaven) Gods who became more dominant and in the end only wanted to prevail. When the dominant cultures colonized the egalitarian cultures we see that gods and goddesses from different cultures became each other’s partner, until mostly a monotheistic religion where a creative Father God remained. The life-giving Mother goddess was deleted from the text books.

If one reads the traditional art history chronology, starting from classical antiquity, many cultures remain invisible. It becomes clear that, even in prehistoric times, art and religion are closely involved and, in particular, that women have played a crucial role.

In classical antiquity, not only many female artists from prehistoric times were hidden, but also the existence of egalitarian cultures remains invisible.

The term “Old Europe” was introduced by Gimbutas (Lithuanian-American archaeologist : 1921-1994) to point out that high level cultures existed in Europe before the existence of the classic cultures. By bringing forward the Neolithic societies of the Middle East and Old Europe, she showed that the persistence of wanting to see the Middle East as the cradle of civilization and Scripture is incorrect.

The Middle East area developed hierarchical State structures, introduced the rise of male gods and warrior kings. They were referred to by scientists as civilizations. But long before the emergence of this patriarchal tradition, there were already large scale settlements without defensive walls, without royal graves full of weapons and without art work mentioning war scenes. The cultures in Anatolia and Old Europe were homogeneous and focused on the survival of the society. Their art works consist of decorative designs based on symbols, in which balance of live plays a big role.

The presence of the huge amount of female art indicates, according to Gimbuta, a worship of the all-encompassing Goddess. One example is Çatalhöyük in Anatolia. (7400 – 5600 BC)

The British archaeologist James Mellaart discovered this settlement in 1958. At that time, he was also involved in the excavations at Hacilar and similarities were immediately recognized between both sites. In both places large amounts of female art was excavated. Mellaart interpreted these images as different types of goddesses, each of them tracing back to a universal Mother goddess: the source of all life, the creator, the symbol of life itself. But for many the existence of a Neolithic Mother Goddess religion meant a large annoyance. The Turkish Government ended Mellaart’s excavations in 1965.

In 1993 the excavations conducted by the Brit Ian Hodder resumed. He didn’t talk about a Neolithic religion anymore, but stated that Çatalhöyük must have been an egalitarian society. The excavated houses are remarkably equal, without centralization and hierarchy. Palaces and Government buildings were not there. Even the grave culture is homogeneous.

There is also a noticeable evolution with the female figurines. The oldest statues are made from stone and show a full woman sitting or standing on the Earth. Starting from the middle of the 7th millennium BC they are mainly made of ceramics, just like pots and bowls. This leads to the conclusion that there has been an evolution from itinerant tribes to more established farming cultures.

Various cabinets of dried clay were found in which grain was stored. In one of the grain cabinets a terracotta figurine of a seated women, barely 20 cm high, flanked by two leopards was found. The museum of Anatolian Civilizations in Ankara calls her the Mother goddess.

We can assume that it were women who created these art works since house and home, where the ceramic ovens stood, were also the domain of women. Besides the female figurines wall paintings were also found there.

Until 5800 BC, mainly hunting men were painted. Then comes agriculture and livestock and women play a more and more prominent role in the paintings. This change in wall paintings may also have to do with the arrival of a cold period in the entire Middle East and Africa accelerating the departure of wild animals.

Gimbutas has done groundbreaking research on Neolithic and Bronze Age cultures in South East and Central Europe and shows that Old Europe was egalitarian before the dominant cultures colonized these areas. In her book “The Goddesses and God’s of Old Europe” she documents and analyses hundreds of archaeological finds. It also provides archaeological evidence that women played a key role in all aspects of life in Old Europe. 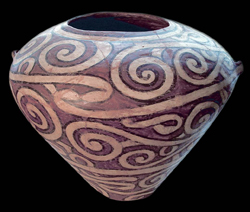 Dancing Bee Goddess, from The Goddesses and Gods of Old Europe
©Marija Gimbutas

In temples one can see that women supervise the preparation and implementation of rituals. In the temple’s workshops women manufactured various types of pots for the rituals.

The pottery from the Cucuteni culture in Romania (4200-4050 BC) has striking cyclic patterns. Similar to the cyclic patterns on the pottery of the female images. They speak the same language, the language of “Old Europe”. The same symbols are also found in the megalithic temples of Malta and in the art of the Bronze Age.

Although predominantly female art has been discovered, there are certainly also known male images. Examples are: the 12 figures of Cucuteni and the couple from the Hamagania culture.

The twelve figurines consist of two groups. One group has the legs tight against each other and have been extensively decorated with cyclic patterns. Probably the female figurines. The other group barely decorated and with the legs spread. Between the legs a penis is visible: the male group. These figurines were found together and show an equality of men and women. 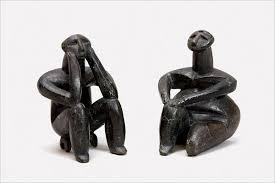 An even earlier example of equality is the pair of images from Cernavoda (Romania). Almost immediately after the discovery (1956) the man has entered the world as “Le Penseur” by analogy with the thinker by Rodin. 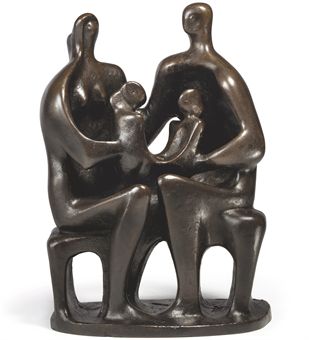 It is striking that many Neolithic works of art have a very modern look and many 20th century artists have been inspired by them. As an example, a statue by Henri Moore (1898-1986)

The arrival of the Indo-Europeans

From 7000 BC there are traces of early farming cultures in South Eastern Europe. Because the climate in Anatolia deteriorated one had to go looking elsewhere for fertile land. People moved to the West and arrived in Greece and around the Danube.

The Danube culture experienced a flourishing trade in pottery. There was also the melting of metal. Initially copper followed by silver and gold. This happened at the end of the 6th millennium BC. The increasing popularity of cast metal attracted nomads from above the Black Sea. These steppe nomads or indo – europeans were strongly hierarchically organized and gradually took control of trade and later also of the production of metal.

Two ideologies collided: the Old European and Indo-Europeans. The Old Europeans focused on agriculture with a peaceful egalitarian structure. The Mother Goddess represented the cycle of birth, death and renewal. The Indo-Europeans were sheperds, who glorified heroic the martial male gods of thunder and lightning. They where organized hierarchically and the dagger and battle axe where their dominant symbols.

The Indo-Europeans eventually dominated the Old European cultures and the homogeneous society disappeared. Thick walls and fortresses came up. The all-encompassing mother goddess is replaced by male gods. For example, we see this reflected in Greek mythology as Zeus devours the goddess Metis when she’s pregnant. By this all her belongings went to Zeus, including her ability to give birth. It ended with their daughter Athena who was born from the head of Zeus.

The Birth of Athena – British Museum, London, UK 560 BC

This is also the case in the Judeo Christian Bible. The God creates the first human Adam and from his rib, the mother of all living, Eva. This leads immediately to the assumption that Eva is, as part of Adam, inferior to him.

The egalitarian culture has evolved into male dominance. This is also reflected in the tomb culture. Honor graves for male leaders, who were buried with their weapons, gold and women, the latter often buried alive.