Michelangelo – The Delphic Sibyl Painting of The Sistine Chapel 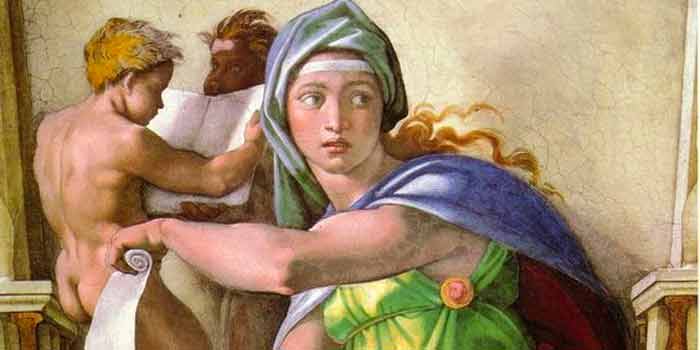 Michelangelo painted the glorious Sistine Chapel ceiling between 1508 and 1512. It took four years to be complete, and of those four years, in 1509, the beautiful ‘Delphic Sibyl’ was painted using the ‘al fresco’ technique along with the other Prophets and Sibyls of the ceiling. 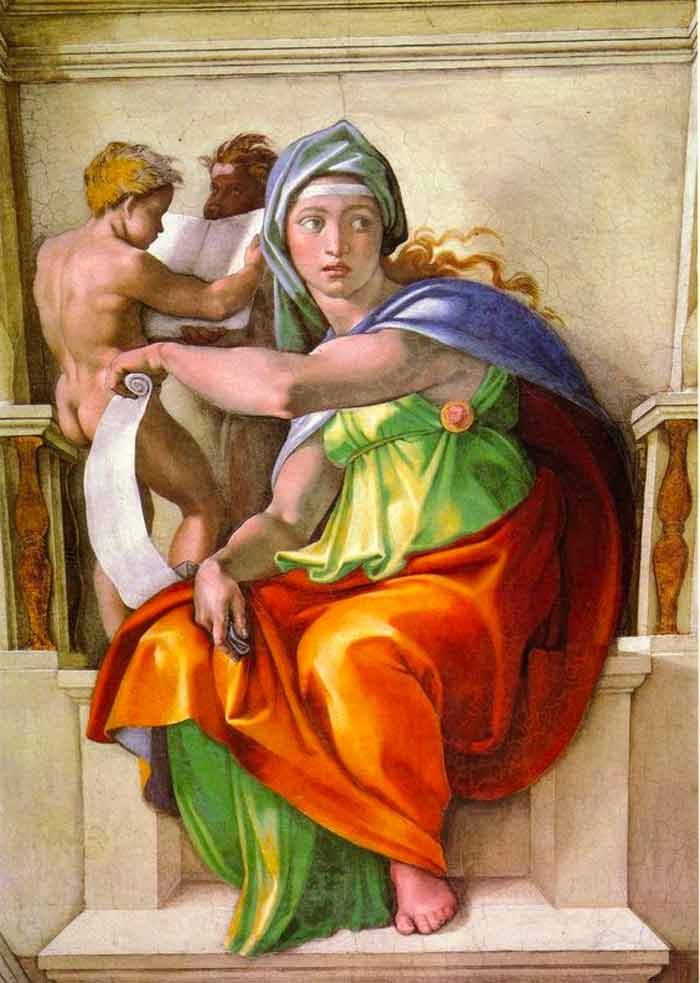 Delphica comes from Greek mythology; she is said to be the daughter of an immortal nymph and a sea monster. It is also thought that Apollo was the brother of Delphic. A sibyl in Greek means “prophetess”; a woman who is believed to foresee the future. Sibyls are a theme of myth and legend carried from the ancient world, and their stories varied. The Delphic sibyl made her prophecies of future events at the natural rock named the “Sibyl rock”, found near the temple of Apollo. A Greek second-century travel writer named Pausanias reported that the sibyl had lived before the Trojan War. She had predicted that “Helen of Sparta would bring ruin to Asia and cause the Greeks to attack Troy” (Pausanias, Description of Greece, Book).

It is strange that Michelangelo would incorporate such sibyls on the Sistine Chapel ceiling as there is no mention of them in the Bible. Christian faith teaches that there is only one God, yet we have a sibyl born from God’s? However, stories of their prophecies ‘of the coming of Christ led teachings to root being passed through generations, and fiction from fact was not distinguished. Then, when the Latin hymn ‘Dies Irae’, meaning ‘Day of Wrath’, was written in the 13th century, the sibyl was mentioned alongside the prophet, predicting the final destruction of the world. The sibyl then became a symbol of the word of God beside prophets in painting and sculpture. Thus, becoming, in the eyes of the Christian faith, the women who prophesied Christianity and the coming of Christ. Also, Christians regarded sibyls as pagans long ago, yet when their prophecies matched those of Biblical prophets, their words became accepted. So, though it may seem inappropriate to have sibyls among true biblical bodies, their presence on the ceiling reveals the teaching that God is with everyone no matter their differences.

Michelangelo’s creation of the ceiling portrays the Delphic sibyl as the youngest of the five sibyls. He captures her youth and beauty as though she were a faun, unsettled by what the future beholds. The painting makes for a compelling study of symbolism that Michelangelo chooses to play with through Delphia’s clothing and the colours he chooses to characterize her.

During the renaissance period, blue was of the most expensive pigments to work with, meaning used only on the bodies of great importance (like Jesus’ mother). The light blue draped mantle covering the sibyl’s head and shoulders shows her connection with the heavens and God. The celestial blue teaches us the truth in her prophecies as the connection to the divine is covering her mind. The mantle is lined with orange fabric containing yellow-golden highlights; this portrays her youth and warmth, sending a message of excitement about her visions. While her sea-green tunic almost takes her away from Biblical teaching and symbolizes her aquatic parents, the colour in Biblical scripture symbolizes immortality; almost linking the two meanings. The Bible also represents green as resurrection; Delphic, in other images, is holding a crown of thorns; maybe she prophesied the suffering of Christ? 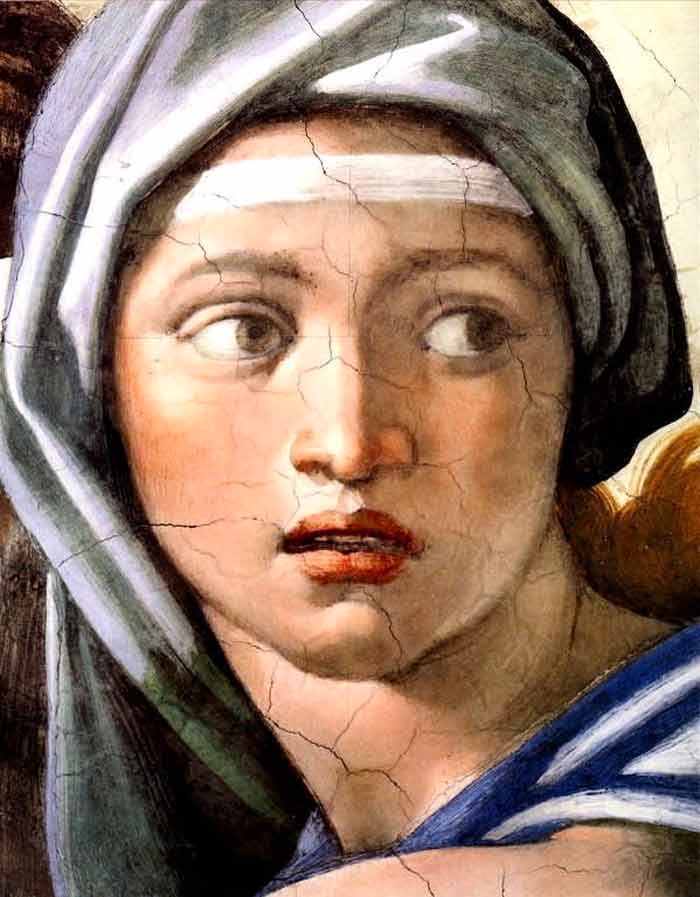 Her clothing softly drapes but appears solid and holds its form well in other areas; this is significant in showing that she is delicate yet strong. Her skin is bright and peach-coloured on her cheeks. While rosy in the light and grey earth in the shadow on her hands and feet. The pink tones in her skin symbolize her innocence and the coming of new life.

The sibyl’s body is in motion; she turns her head as if she has heard a voice, visions set deep in her eyes and her soft blonde hair is said to be blown by the Holy Spirit. She holds a scroll with a prophecy she has foretold as the infant behind her reads to a spirit.