The Misconceptions of Greek Sculpture 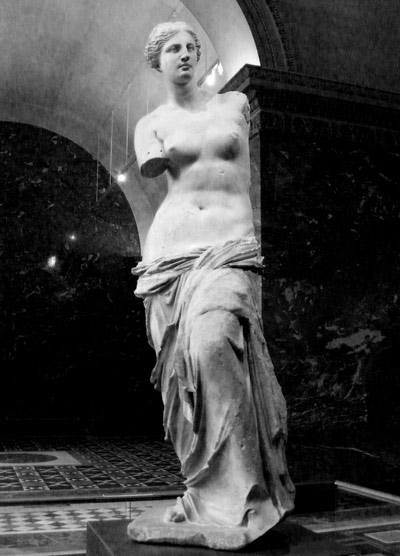 When we think of Greek sculpture, we tend to have beautiful white statues made of marble run through our heads. The figures are realistic, full of movement, and idealized.

The Venus de Milo, one of the most popular Greek sculptures, comes to mind. Limbs are missing, clothing falls in a dreamlike motion, all on the nude figure.

What most people do not realize is that sculpture in Greece was not how we view it today and we are left with but only a faint shadow of the true experience.

The Venus de Milo is a typical representation of what the average person thinks Greek sculpture is.

One of the first misconceptions we have is at first sight. The luminous white statue before us was not meant to be viewed as plain and raw. The Greeks actually painted their subjects; quite vividly, too. They were covered with yellows, blues, and reds. During the 1800s, archeologists uncovered many sculptures with specks of color scattered here and there. This discovery was not acknowledged for one to two centuries. Many art historians decided long ago that painting a marble was like sacrilege to the chalk-colored surface. Sculptors also believed this, as seen in the works of Michelangelo and Bernini. It took many scientific studies and publications to confirm the new findings.

It is also common for people to assume that marble was the only medium that the Greeks manipulated when, in reality, the ancient artists had much more to work with. Using materials like wood, bronze terracotta, and clay, sculptors created small figurines, though they could not pass the test of time, as they were highly susceptible to decay and weathering. Bronze was the exception. The metal, along with marble, had long-lasting, sturdy properties. Bronze had to be melted down and cast in order to be shaped, which allowed for malleable capabilities and statues of monumental proportions. The greatest reason that sculptures made from this valuable metal rarely being seen is due to the fact that bronze, as I previously stated, is a valuable metal. Throughout history, people have melted the figures down for reuse – for everything from jewelry to military supplies. The few pieces that have survived were somehow either buried, submerged in water, or, in rarer cases, found and protected be art appreciators before a greedy spirit could lay their eyes upon them. Thankfully, the Romans, infatuated with Greek culture, made a plethora of copies from original bronzes, leaving us with a vague idea of what they looked like before becoming lost or destroyed.

Greek sculpture is known for its exceptional realism. The figures are so well studied that they seem to be frozen in stone, yet able to walk if only they could break out of their static shells. We believe this now and so did the Greeks. They would go as far as chaining down their sculptures to prevent them from fleeing. However, this naturalism was not always the case in Ancient Greece. The art can be broken down into three periods: Archaic, Classical, and Hellenistic. The anatomically idealized forms we see are found in the Classical and Hellenistic Periods, with pieces like the Discus Thrower and Venus de Milo, respectively.

Lacoön and His Sons is a Hellenistic sculpture from Greece.
Notice the profound realism and emotion.

The Archaic Period creates a stark contrast with it successors. Sculpture in that point of time was influenced by other ancient cultures. The figures were stiff, upright, and symmetrical. The musculature was somewhat geometric with abrupt transitions. Upon closer inspection, patterns can be seen carved into the stone – limestone in the early period. It was common for one foot to be in front of the other, reminiscent of Egyptian art. Perhaps the most iconic feature from the Archaic Period is known as the archaic smile. Many figures of the time were depicted with an enigmatic smile on their face. There are multiple theories on what the expression represents. It could make the figure look more alive, add otherworldly attributes, or exhibit a desire for more natural forms.

As with all things, Greek sculptures felt the test of time. Bronzes were melted down to suit the current needs. Gravity and erosion led to limbs breaking off from the body. Paint slowly peeled away. After many centuries, we are left with but only ghosts of masterpieces and inaccurate notions of Ancient Greece. All we have is what once was.