More than meets the eye

The Fable of Arachne or The spinners is one of my favorite paintings ever. Why? Well it has many of the elements that I love about art. Firstly, it tells a mythological story: the fable of Arachne; secondly, it is full of characters and elements that surprise us as we discover their meanings. And finally, it’s like having a painting within a painting. Not to mention that is was made by one of the greatest painters: Diego Velázquez. 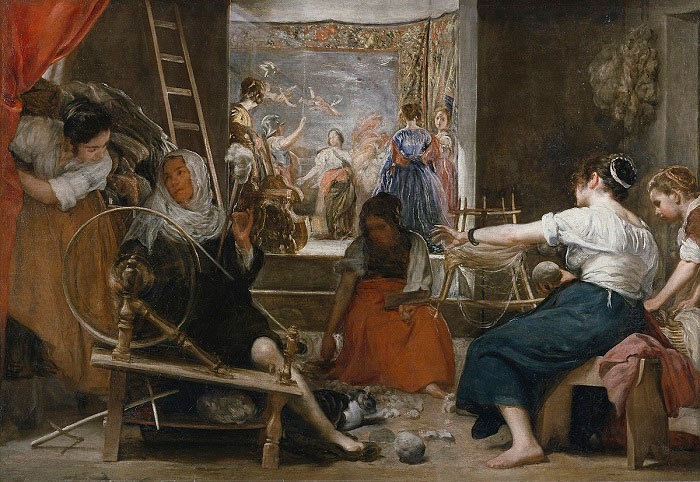 Arachne used to be a woman with a tremendous skill for weaving. She was so talented that people admired her works above all and claimed that she was taught by the goddess Pallas. However, she denied such claim stating that her skill was hers and hers alone. Upon hearing this Pallas descended to earth disguised as an old woman and recommended Arachne to ask forgiveness from the goddess. Not only did she refused to apologize, but she challenged Pallas. Seems like no one told her NEVER to challenge the gods, they’re gods!

Without wasting time, the both of them started weaving the most extraordinary images. Pallas decided to illustrate the story of her dispute with Neptune over the naming of Athens. Additionally, she displayed on each corner of the tapestry a story of mortals and their tragic fate after bothering the gods. On one of the corners there were King Haemus and his wife Rhodope transformed into mountains for having compared themselves with Zeus and Hera. Then there was the Pygmaean queen, Gerana. She claimed to be more beautiful than Hera for which she earned to become a stork, and then Hera commanded her people to wage war against the storks. The third corner had a depiction of Antigone as a bird for challenging Jove’s power. And finally, there was the story of Cinyras and his daughters. Just to finish she wove a border of olive-wreath.

Arachne, on her side, wove scenes of stories were the gods use mortals with no regards, as it pleases them. She wove the rape of Europa, a story that tells us how Zeus transformed himself into a beautiful white bull to attract the attention of Europa and be able to have intercourse with her. In total, she wove 21 myths of Gods raping women: Zeus and Asterie, Leda, Antiope, Alcmena, Danaë, Aegina, Mnemosyne, and Proserpine; Neptune and Kanake, Aloidae, Bisaltis, Ceres, Medusa, and Melantho; Phoebus as a hawk, a lion, and with Isse; Bacchus and Erigone; Saturn and Chiron. She added a border of flowers intertwined with ivy.

Pallas looked at Arachne’s tapestry and couldn’t find any flaw in it. But the goddess refuse to accept her defeat and as a punishment she turned Arachne into the first spider being able to keep weaving for the rest of her life. It is a wonderful myth!

As Arachne’s myth contains other myths within, Velázquez chose to include another famous painting into his own. If you look closely to the background scene, you’ll see Athena watching Arachne’s tapestry. Velázquez paid tribute to two of his major influences: Titian and Rubens. 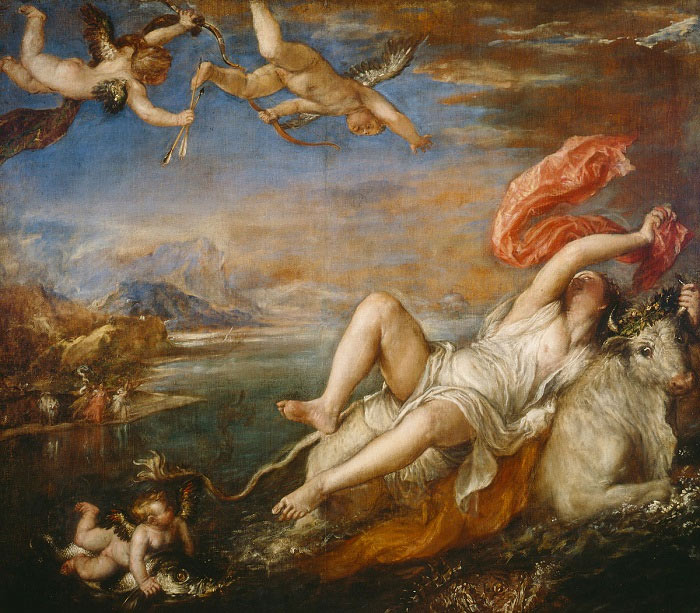 And almost 70 years later, Rubens made a copy of Titian’s painting: 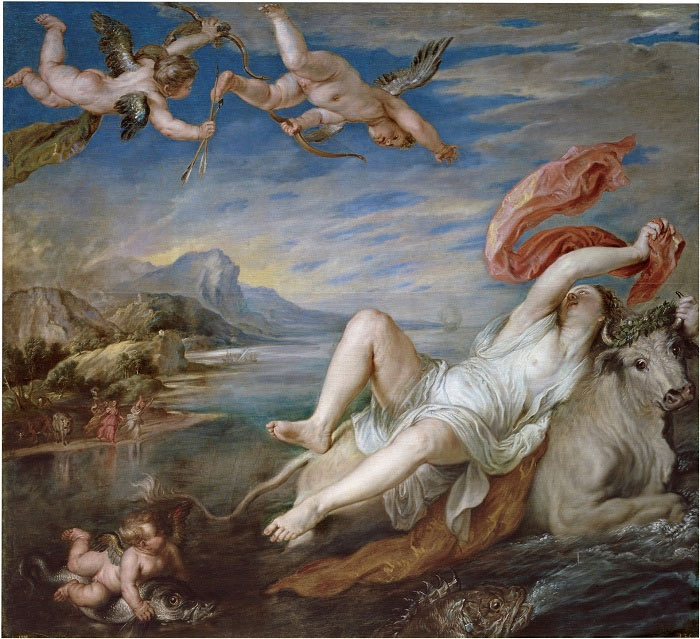 You can see the angels, Europa’s drapery and the eye of the bull in Velazquez’s work. In the foreground, we see the scene of the competition. On the right side of the painting, we can see Arachne turning her back at us; while on the other side, there is a Pallas as an old woman.

At first, when we see the painting for the first time, we tend to think it represents a common tapestry shop scene. In fact, earlier interpretations talked about it as an everyday scene. But now we know that it’s so much more. Not only did Velázquez depicted a fabulous scene, he told us a story and had time to render a homage to his masters!