Rutilio Manetti was one of those busy and reliable provincial painters whose manner was derived from the innovations of more important artists in major artistic centers and who, in certain works, brought an injection of metropolitan excitement to the art of his home town. He fulfilled a purely local demand for altarpieces, decorations, and history paintings in styles reflecting several of the fashions of the day, some reminiscent of Caravaggio, others of the Gentileschi, and so on. Manetti has benefited from the stimulating resurgence in Italy in the last twenty years of local interest in native talent, even thought he was not one of the innovators in the history of Italian painting not even one of those artists with a quirky and appealing poetry who sometimes emerges despite a provincial heritage.

If Siena, where Manetti was born in 1571 and where he spent most of his life, was a less significant city under the late Medici rule in the seventeenth century that it had been as an independent city-state in medieval times, it still was quite an important religious center and there was a lively demand for a good painter or two to serve the church, city and private patrons. Little is known of his early career. After completing the altar piece of the Death of the Blessed Anthony Patrizi ( Sant’ Agostino Monticiano) in 1616 a painting that betrays some knowledge of the advanced art of Artemisia Gentileschi who was active in Florence at that time, Manetti likely went to Rome.

There he was most susceptible to the work of such Italian followers of Caravaggio as Orazio Gentileschi (Artemisia’s Father) and Bartolomeo Manfredi. However the source or sources of his style ( he was quite variable) are notoriously eclectic, complex, and difficult to pinpoint. For example his paintings have the drama and bold contrasts of light and shade associated more with Caravaggio’s Northern followers such as Gerrit van Honthorst and Dick van Baburen. At other times they show an awareness of the more classical yet sensuous art of Guido Reni. His composition generally retain something of the crowded quality associated with the late mannerist style which had long been rejected by the more advanced painters of Rome. Manetti was in any case back in Siena by 1621 and seems to have passed the rest of his life there. 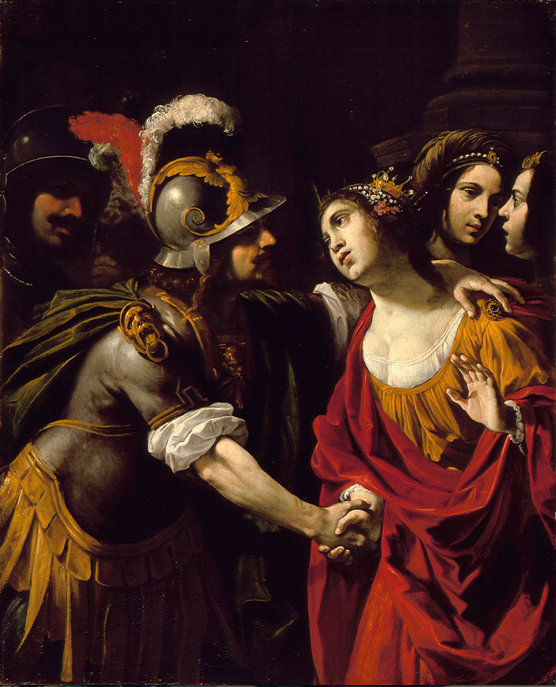 Dido and Aeneas is a mature work, dating from the early to the mid -1630s. the story comes from Virgil’s Aeneid (4:362-92) and shows the farewell of Aeneas as he abandons the distraught and soon-to-be-suicidal Dido to continue his voyage to Latium. Two of her maids-in-waiting wisper this concern about this unwelcome departure, while an armored soldier waits impatiently for his leader. The resolve of Aeneas is clear in his firm but somehow impersonal handshake and from the fact that he is dressed in an elaborate cuirass and plumed helmet.

The painting illustrates Manetti’s eclecticism quite well. The design is based on a painting of Dido and Aeneas done by Reni about 1626-28, wich is now known only through studio copies. The basic composition and narrative are similar, but Manetti is more anecdotal in introducing the three subsidiary characters, making his composition more crowded

The soldier on the left, with shadows playing across his face, is quite like a character Guercino could have invented, while to two females attendants are suggestive of an artist such as Manfredi. However the bold handling and the impasto and the clear action of Aeneas and Dido recall Manetti’s principal model here, Reni.