How I got my art back

It was 1998. My husband was gone. My mother had died of leukemia that June.and I was trying to get my live back together.

I had been back in the States for already two years. I had found work, a place to live, and even bought a used car. At first, I thought I wouldn’t need one and just use mass transit as I had done in Japan. However, by November, the temperature was hovering around freezing and I realized that there was no way I was going to be walking the 20 minutes and waiting for buses that were never on schedule or never even came. So I gave in.

As far as friends were concerned, I tried to connect with old friends, but somehow that didn’t work. Either they had changed or I had changed or the both of us were in different places. We had all moved on and no longer understood each other. It was fine. I was meeting new and different people.

Things were more and more stable in my life. I followed a friend’s suggestion and had written down things that I enjoyed in life. I had done that in Japan, too. But the things I had enjoyed doing there were often very different from what I could do here.

I started going to dance class.

I joined the historical society.

I taught cooking to some of my students.

I visited places where I lived that I hadn’t been to in years, and of course I bought books..tons of books, because they were in English and they were cheap and I had to catch up on the latest.

But there was always something missing…

At first, I didn’t really know what it was. I had shut down, cutting myself off from feelings for such a long time that I couldn’t hear the little voice deep down.

But finally, slowly, I could hear it.

“You should paint again,” it said.

I had gone to art college, but had stopped painting when I got married.

No, I thought, I’m sure I’ve forgotten how.

“You should try,” the tiny voice said..

But I don’t have any painting supplies.

“You could buy some.”

I met a new friend and neighbor. She was a Japanese woman who had come to America in her 40’s leaving her kids to go to the Fashion Institute in Manhattan. She had wanted to learn to paint and left her family to follow her dream.

The voice came again..”Yoko did it. You should paint, too!”

I thought about it more and more, wondering, ignoring, not listening,
but the voice was getting louder.

My list of excuses was running out. I thought about it more and more..the little voice never gave up…

I liked history and was surrounded with historical houses with re-enactors in costume. I played with the idea of doing primitives and looked on-line. I definitely could do that, if I was going to paint..,

But primitives were so, well primitive and then people would think I couldn’t really paint very well. No, if I really was going to paint that would never do. I put it off for a while.

Then by chance, a friend who had visited the Met in Manhattan started telling me about the beautiful and realistic paintings of the 18th century. I started looking through books and I found John Singleton Copley.

Yeah, probably.. I was most certainly setting myself up to fail.

See, I can’t paint, annoying voice in my head!

Yes, I would prove to myself that I couldn’t paint. It had been way too long.

So, finally I went to the local art supply store, bought some paints and a canvas.I made a copy of Mary and Elizabeth Royal by Copley. I set things up on my dining room table.

Huh, maybe I can change things around.

My canvas was really too small. I would just do one of the sisters, the one with the dog that looked like a skunk with no backbone….and I didn’t really like the girl’s face so I would put in my niece, Savannah’s face instead. Yes, that would be the challenge…if I could pull this off, I would continue to paint. 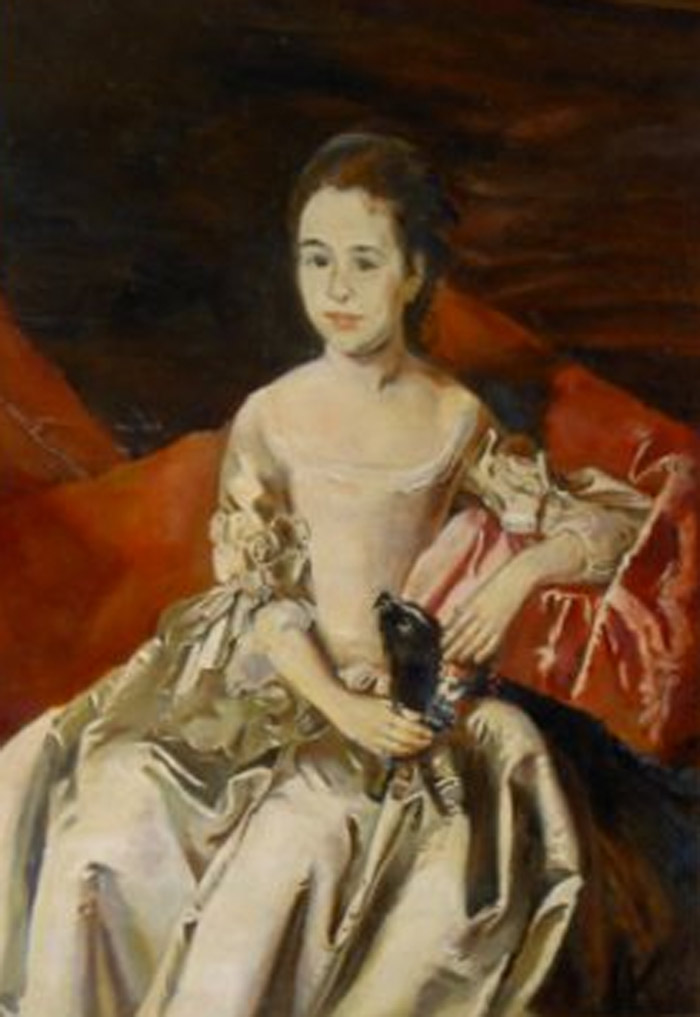 So, slowly, ever so slowly, I worked. It started to come and I would dance around my living room like a loon. Then I would do something wrong and I would be depressed, horribly depressed….it was a horrible roller coaster and yet I couldn’t stop. I had to find out.

About a month later, I was done. I had painted. I couldn’t decide if it was good or not. Too much was invested. A friend stopped by unexpectedly and saw the finished painting hiding in the corner of my dining room.

“Oh my God! That is unbelievable!” were her words.

I was stunned. I guess that was what I had been waiting for all along. It was my green light. The little voice had won!

That was 16 years ago. After that, I started painting regularly. I learned to control the roller coaster of feelings and I bought every book and on-line course that I could find. I signed up for classes.

I now paint most days, feeling empty and unfulfilled when I don’t. I have found my heart’s desire.

I’ve since met many people who have started painting or doing their particular art again. They all have different stories about why they didn’t paint and why they had ignored the little voice inside.

So….Is there a little voice that is whispering to you? Do you listen to what it is saying or are you still ignoring it? I know it is hard to follow your heart. It’s not easy to give in and trust, but it can ultimately show you what you are really supposed to be doing. The voice might actually be the guidance system built into all of us.

Maybe some will never listen. Maybe it’s too late for them, but isn’t it worth it for you to find out?

Isn’t it time to listen to the little voice? I hope you do.Think about it. Talk to others. Let me know.

I would love to hear your story and your struggles to find your heart’s desire.