Valentin Serov was born 19 January 1865, the only son to a family active in the St. Petersburg arts community. His father was a composer and famous music critic, his mother over 25 years his father’s junior. He grew up surrounded by the notable Russian artists of the day, his parents hosting sculptors like Mark Antokolsky and painters like Ilya Repin. In this environment, Serov’s talents were early recognized and cultivated.

When Serov was six, his father passed away. Although his mother devoted herself primarily to her social obligations to the detriment of her son, once she saw his artistic gifts they moved to Paris. There, the young Serov had the opportunity to study more deliberately under Repin, who had taken residence in Paris. Although Serov began to formally develop his talents, he also became rather withdrawn.

In 1875, Serov and his mother were invited to Abramtsevo, outside Moscow. Studying again under Repin, who had since returned to Russia, Serov began to develop a passion for the countryside around Moscow. This would inspire many of his later works, including a series of illustrations based on the fables of Krylov.

In 1880, Serov joined the Academy of Art in St. Petersburg, studying under the very particular Pavel Chistyakov. Serov respected his teacher despite his demanding nature, but nonetheless left the Academy after five years due to boredom. He then travelled outside Russia and was introduced to French Impressionism, the bright colors and appreciation for nature of which struck a chord with him.

He introduced these Impressionistic elements in such paintings as The Girl with Peaches and The Girl in Sunlight to great acclaim. Both paintings, one of a young girl at a table cutting peaches, the other a young woman resting beneath a tree outside a wooded grove. Both paintings are light and vibrant, capturing the immediacy of the scene. 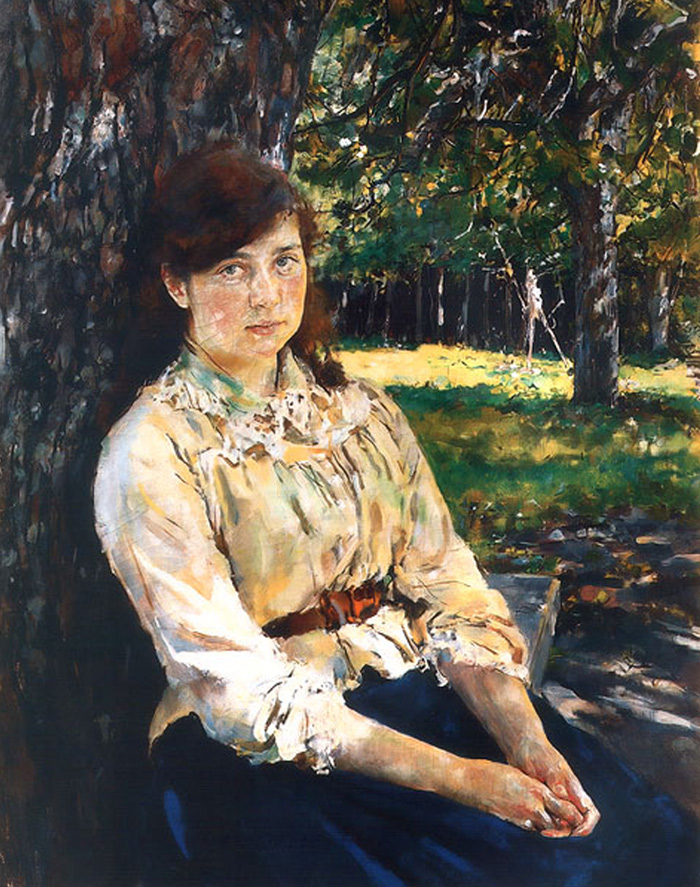 Girl in the Sunlight (Portrait of Maria Simonovich), Valentin Serov, 1888

The interplay of light with the subjects, illuminating the girl in Peaches and dappling the scene through the trees in Sunlight, inaugurated the period of Russian Impressionism. Serov’s efforts garnered him an award from the Moscow Society of Art Lovers and created his name as a famous portraitist.

It was also during this period that Serov met his wife, Olga Trubnikova. Theirs was a happy marriage, producing two sons and fostering in the artist a love for and appreciation of children. Young people would feature in many of his most famous pieces, and he was exceptional for the psychological complexity with which he endowed them. From 1890 on, Serov focused chiefly on portraiture, especially of the noble elite of Russia. He was a very studious portrait painter, demanding 90 separate sittings over the course of three months. Serov wanted to capture not just the appearance of his subject, but moreover their inner character—even if that depiction was less than complementary. Nevertheless, artist was always in great demand, although that did not preclude the peculiar behaviors of his aristocratic subjects. A portrait of Emperor Alexander III took three years to complete, because the artist had to work from photographs, being given on a single sitting with his subject! Another portrait, that of Emperor Nikolay II, was marred by the Empress’ constant critiques, prompting a frustrated Serov to ask her if she wanted to finish the painting instead. In 1894, Serov joined a group called the Peredvizhniki, “The Itinerants,” a group of Russian Realist artists who formed a collective in contradiction to Academy strictures. The group originated from a struggle for greater democratization in Russia during the 1860s, rebelling against what was perceived as the imperial center of art, the St. Petersburg Academy. Nevertheless, Serov still enjoyed the clientage of many aristocrats and famous citizens, and The Itinerants’ exhibitions were well-regarded.

Serov served as a teacher at the Moscow School of Painting, Sculpture, and Architecture from 1897 to 1909, although he moved back to St. Petersburg in 1900 to join the World of Art Group. The association and the influential journal it spawned were in part a reaction against the Peredvizhniki, with whom the new group had grown dissatisfied. Serov also at this time was inspired to begin painting historical pieces, although they were still imbued with his personal style.

Towards the end of his life, Serov became more decidedly democratic. During the Russian Revolution of 1905, Serov sided with the protesters, creating satirical works of the pro-imperial forces. After Bloody Sunday, in which striking workers and their families were killed by the military, Serov resigned from the St. Petersburg Academy in protest (having only become a full member in 1903).

Following the Revolution, Serov travelled to Greece and Crete with his friend, Leon Bakst, a renowened painter and costume designer. There, he studied the ruins of Knossos, which inspired one of the most famous paintings from his late period, The Rape of Europa. 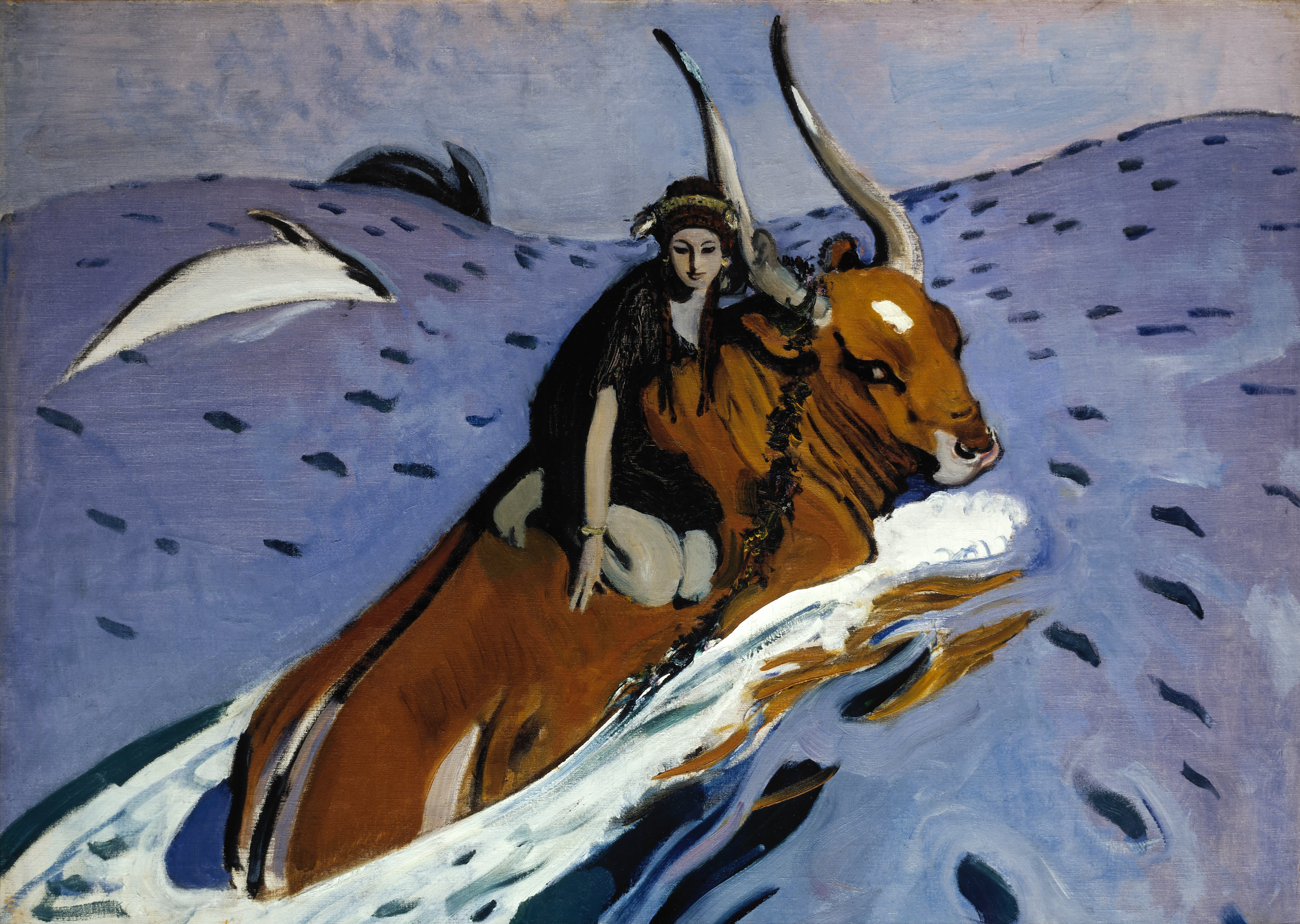 The tale of Zeus turning into a bull to kidnap the lovely Europa was a common theme for European artists, but Serov made several signal changes to the theme. The piece is decidedly Impressionistic, with a heavily stylized ocean and a somewhat flat composition. Nevertheless, Serov introduces Classical elements in the idealized presentation of Europa and Minoan elements in the color scheme and the flying fish (that being a motif of Minoan art). Even Europa herself looks composed and self-assured, rather than fearful and weak as in most depictions of the tale. It stands as a unique achievement from among the artist’s later work.

Despite his tendency for gloominess, Serov was a natural entertainer and enjoyed making people happy. He was also passionate about handicrafts, especially ceramics. He even painted some of his pottery into his works! He died on 5 December 1911, at the age of 46.