The phenomenon of Malevich 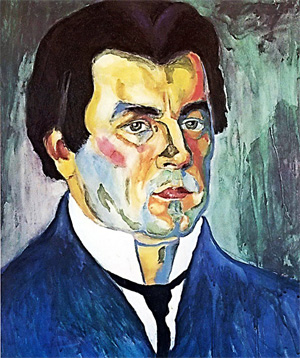 Born 11 February 1878 to a Polish family in Kiev, Kazimir Malevich is best known as one of the standard bearers of non-figurative, avant-garde art. The eldest of fourteen children (nine of whom survived to adulthood), he moved around often because of his father’s work on sugar beet plantations. Despite his distance from formal centers of learning, the surrounding beauty and color of the Russian landscapes left an indelible impression upon him.

Seeing a roof-painter and being mesmerized by way in which color transformed his grand palette, Malevich fell in love with painting.

His parents humored his interest, buying him a medical brush at a pharmacy, all the while assuming he would follow in his father’s footsteps and assume a more fitting occupation.

He studied at an agricultural school (his only formal education), and for the next several years he lived a conventional life in the city of Kursk, getting married and having two children, one of whom, Galina, lived to adulthood.

Kursk also marked Malevich’s entrance into the artistic world. Much like the contemporaneous Impressionists, he was fascinated by light’s impact on color and perspective. He was forced to keep a normal job—drawing for the Kursk-Moscow railway—but eventually his passion won out, and he enrolled in the Moscow School of Arts, Sculpture, and Architecture Academy in 1905. He failed (indeed, he would never graduate from the Academy), but he nevertheless moved with his family to Moscow.

Much like his professional life, his personal life was in turmoil. He divorced his first wife but had remarried by 1909 to Sophia Rafalovich, a children’s writer. He began to work with Fyodor Rerberg, an artist connected with various avant-garde movements throughout Europe. This led to a connection with Mikhail Larionov, who invited Malevich to join his group, the “Jack of Diamonds.” Thereafter, he exhibited at progressive, shocking art shows, creating paintings like The Knife Grinder and The Woodcutter. Surreal and psychedelic, his ostensibly figurative paintings bear only the slimmest resemblance to their subjects, instead suggesting subsequent modern art movements. He spread his talents to other media, including writing and set production.

In fact, the opera one which he worked was a cacophonous tumult of noise, despised by most of its listeners who had never heard such things. The experience caused him to embrace “suprematist” art, a style that moved even beyond Cubism in its non-figurative approach. The most famous embodiment of this philosophy is Malevich’s Black Square. True to its title, the painting is a simple black square, lacking depth or any subject at all. The canvas invites the viewer to reflect upon its featureless surface in a quest for the meaning of art.

His revolutionary spirit was a great asset during the Bolshevik Revolution in 1917. He helped create propaganda for the new Soviet regime, all the while writing and painting in support of his new artistic vision. In 1923, after a few years in Belarus, he headed the State Institute of Fine Art. He applied his hand to architecture, creating styles that were celebrated in the West but largely ignored at home. In fact, he became less welcome in his home state, where the revolutionary spirit had forged a new regime, one that wanted to keep its citizens cowed.

Although the Soviet government disliked and distrusted Malevich (arresting him twice, in 1927 and 1930), he was allowed to travel abroad. During this time, he transferred a great quantity of his work to Germany, where it became the core of the Amsterdam Museum Collection. He died of cancer on 15 May 1935, still scorned by the government. During World War II, his burial site was lost and he was largely forgotten by the world. Finally, an exhibition was held in 1988 in the Tretyakov Gallery, helping to restore Malevich to his rightful place in art history.