So, What is the Deal with The Mona Lisa?

Arguably the most famous painting the modern world has ever known, yet it’s not how it’s always been. Let alone the possible price of the painting itself, its valued so much that the room in the Louvre that houses and protects this painting costed over $7.5 million.

The Mona Lisa is a portrait of an Italian woman painted by the famous artist and engineer Leonardo da Vinci. The thing that makes this painting so famous is the mystery that comes with it. Who is the woman? Where is the painting set? What is the figure trying to convey? How long did this take Leonardo da Vinci to complete? Why did he decide to paint this mysterious lady?

The Mona Lisa is painted on a poplar panel with the dimensions of 77cm to 53 cm (30in x 21in) using oil paints. However the poplar panel warped due to changes in humidity (The painting was at one point exhibited in the Kings bathroom) The painting is now a part of the collection of art found in the Louvre which had 9.3 million visitors in 2014 of whom 80% had only wanted to see the Mona Lisa.

The subject is speculated to be Lisa Gherardini, the wife of Francesco del Giocondo, a wealthy Florentine silk merchant. Leonardo da Vinci is said to have painted this painting over a three year time period starting in 1503 but some art historians and historical evidence suggest that he continued working on and refining it until the year 1517. When Leonardo da Vinci moved to king’s castle in Amboise, the painting came along with him.

Afterwards, the painting was relocated to the Palace of Fontainebleau (55 km/34 miles from Paris), then under Louis XIV, to the grand Palace of Versailles. After the French Revolution in (1789-1799) the painting moved to the museum of Louvre with the exception of a brief period in which it was displayed in Napoleons bedroom.

For many years The Mona Lisa wasn’t famous at all in the sense we know today. The painting gained fame when it was the cover of a local newspaper. 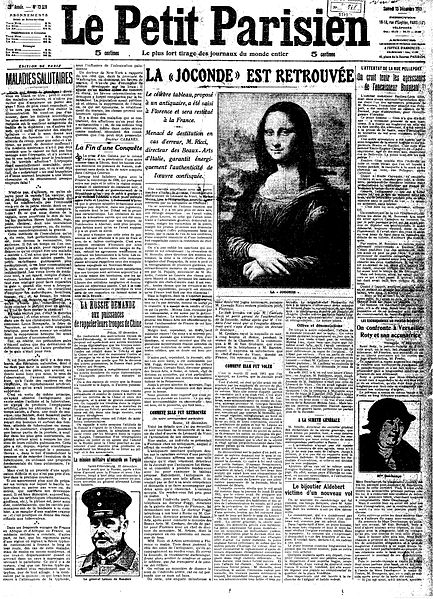 The painting was stolen from the Louvre on 21 August 1911. Famous people such as the French poet Guillaume Apollinaire who criticized the museum and called for it to be ‘burnt down’, Pablo Picasso the famous cubist artist, and Eduardo de Valfierno. After 2 years it was found out that an Italian employee had stolen it, believing it’ birth place, Italy was the right place for it to be displayed. The story was the cover of the ‘Le Petit Parisien’ on 13th of December 1913, making the Mona Lisa the star of the Louvre.

However, this wasn’t the only time something bad would happen to this mysterious lady; in 1956, part of the painting was damaged when someone had decided to threw acid at it and in the same year a piece of rock was thrown on the panel as well. Not the mention the times when while in display in Tokyo a woman sprayed red paint over the master piece, a world heritage, for being upset on the museums policies regarding disabled people.

Nevertheless, the painting is more famous than ever, an has become an icon of art, Louvre and even, for some, Paris.