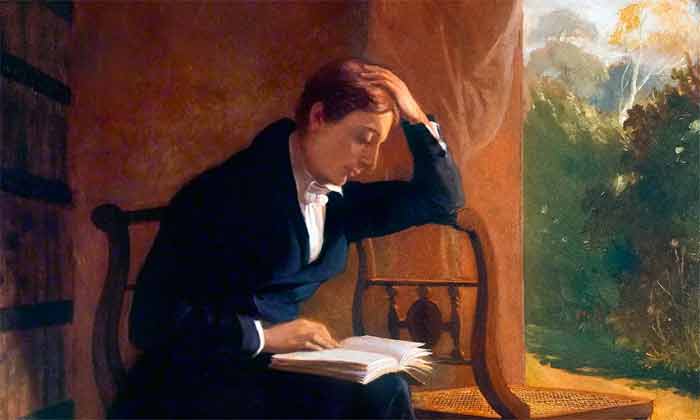 The painter Joseph Severn devoted himself to caring for the poet John Keats, who was suffering from tuberculosis. Keats’ last moments in 1821. He is deeply absorbed in the book.

The Girl Reading a Book by Jean Honoré Fragonard (1776) 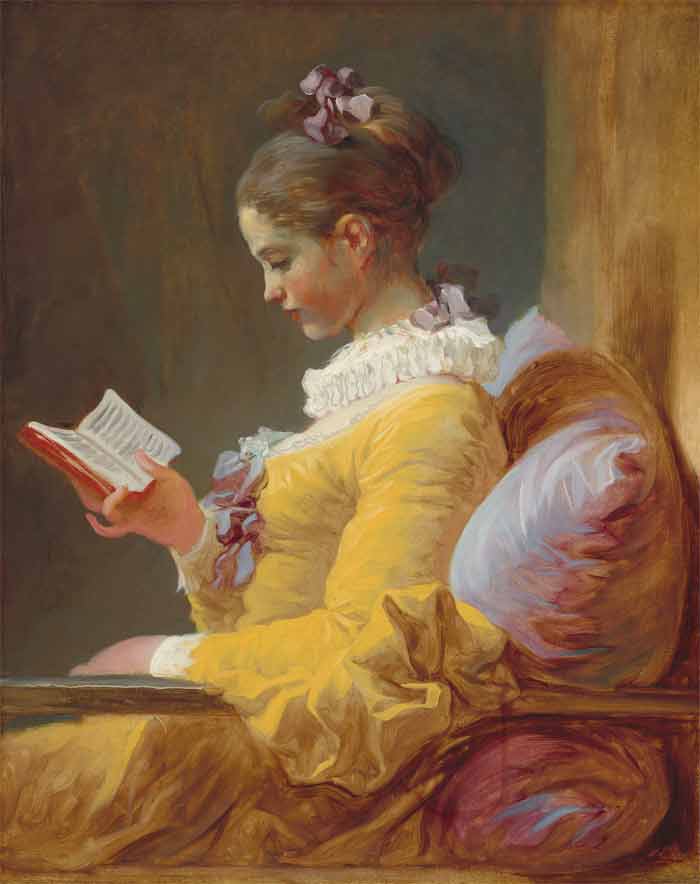 The character is a profile figure holding a book lightly in her right hand, completely absorbed in reading. She is probably sitting by the window reading a book. Because her face and body are lit up, and faint shadows are visible on the wall. She wears a lemon-colored dress, with white collars and fawn ribbons that accentuate her torso, neck and head. Her warm brown tones make the pillow feel soft and warm. It is a painting that captures the intimate moment of a person, and in a sense, the artist intervenes in the person’s inner life or in their extremely private time. There are various brushstrokes, but the dress is painted very darkly by mixing yellow and white, while the pillow has a loose touch. The collar part is expressed in detail. Overall, I feel that reading a book as an intimate and lonely act is well expressed. The fascination of reading books! 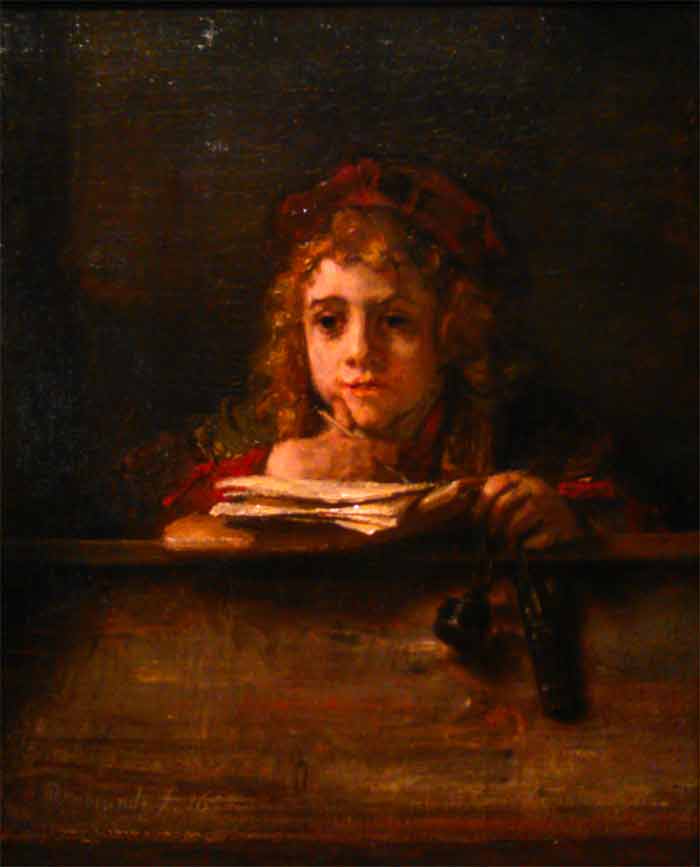 Rembrandt’s son Titus (then 15 years old) by Saskia is reading a book. At the time of this painting, Rembrandt was in serious financial trouble. In 1668 Titus married, but died the same year at the age of 27. Rembrandt dies the following year. 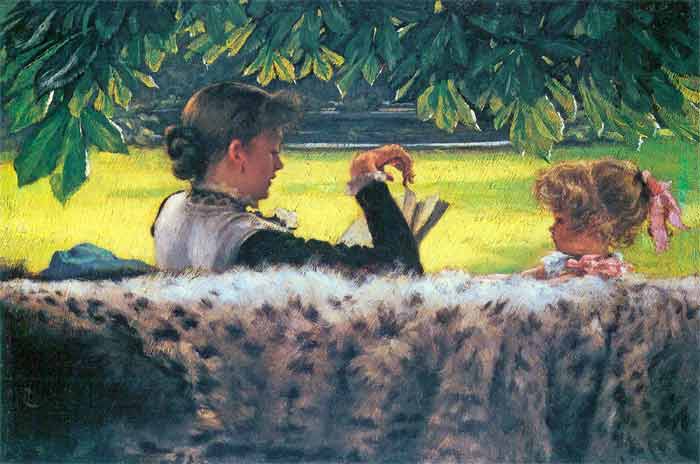 I loved England very much. The French painter James Tissot changed his name from Jacques Josef to James Tissot and painted mainly Victorian life in London.

The Station of Saint-Lazar by Edouard Manet (1873) 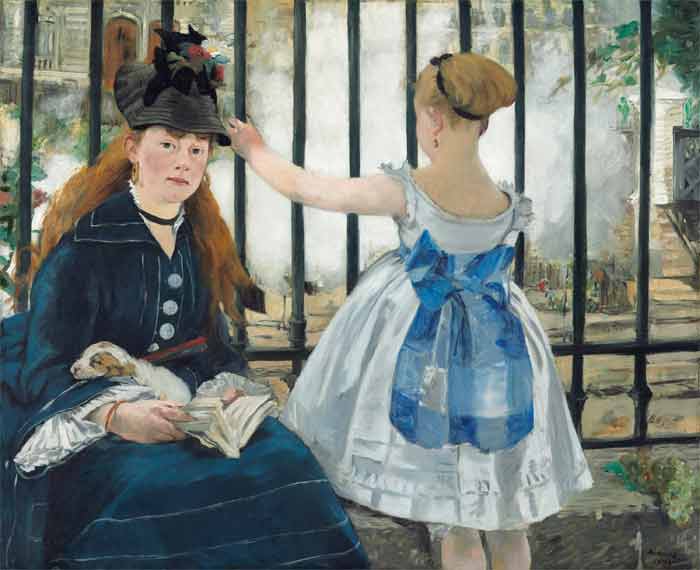 It seems rebellious and insensitive. Sometimes showing a piercing gaze. This painting shows the characteristics of the model Victorin Meurant (1844-1927). When we say that literally modern painting was born.

In the Bookshop by Viktor Vasnetsov (1876) 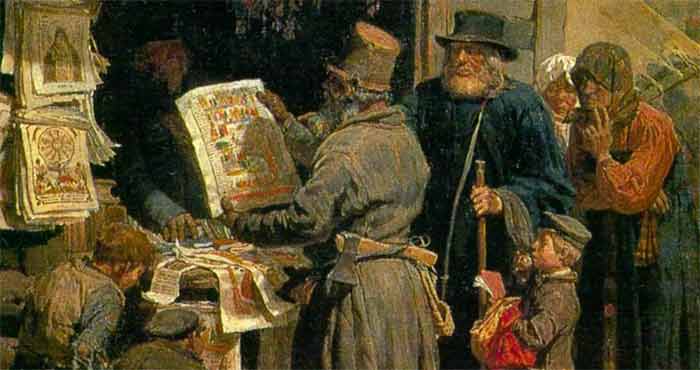 Vasnetsov (1848-1926) expressed Russian nationality. He was a painter of the Abramtsevo school, who tried to revive a kind of national art. It is not a bookstore in an urban area where intellectuals come and go. It is a shabby bookstore in a small town that mainly sells paintings of sacred images.

Portrait of Duranty by Edgar Degas (1879) 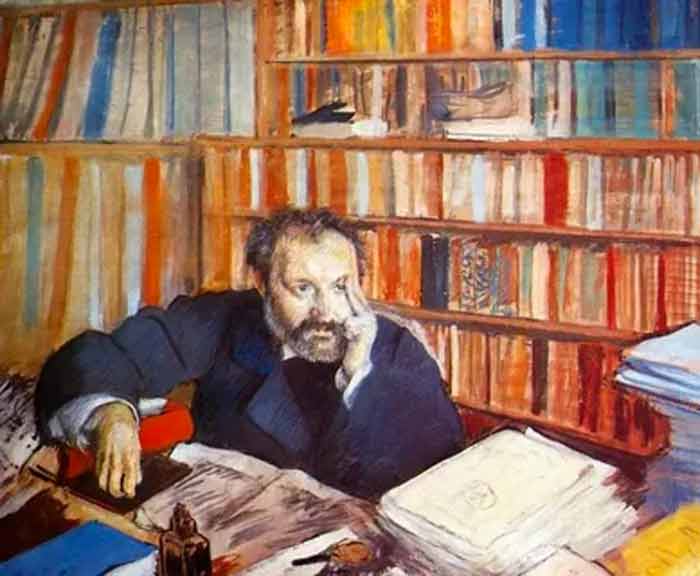 The novelist and art critic Louis-Emile-Edmond Duranty. He was the illegitimate child of the author Prosper Merimee. He developed a realist literary movement and supported impressionists. A year after Degas painted this portrait, Duranty died.

Don Quixote in the Study by Gustave Doré (1862) 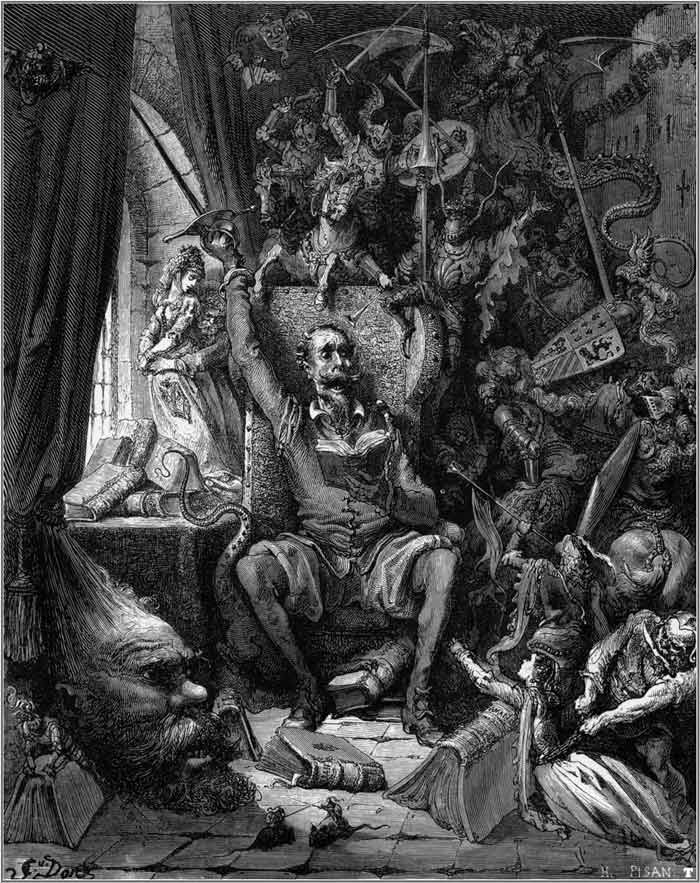 In the mid-19th century, Doré was one of France’s leading illustrators. In addition to Don Quixote, Gargantua and Pantagruel by Ravelle, New Song by Dante, etc. He is famous for drawing illustrations for more than 220 books. He is also one of the pioneers of Western comics. The scene where Don Quixote, a ‘book madman’, falls into a knight saga and loses his sense of reality. It is humorous yet fantastically portrayed. 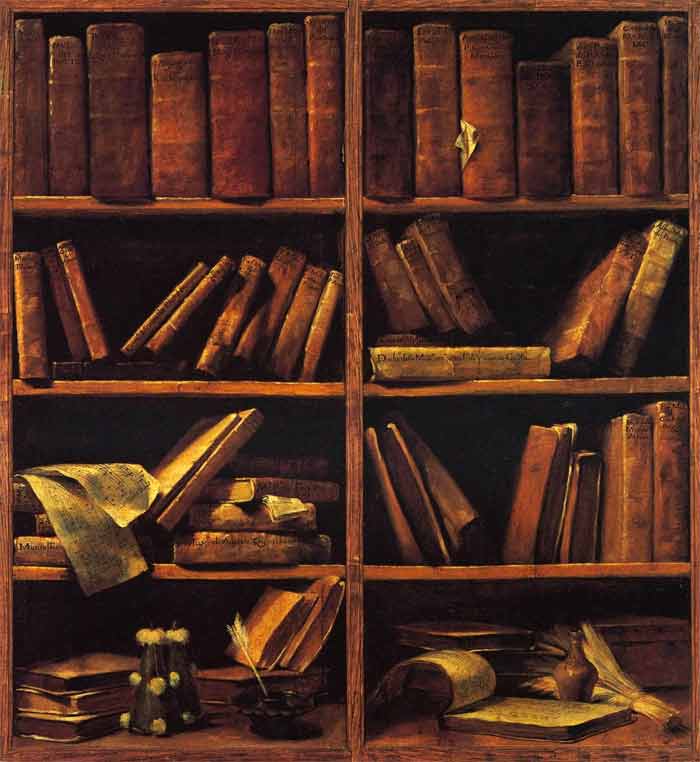 Musician and music historian Father Giovanni Battista Martini’s library. Book titles in the paintings were added by another artist in 1746-1757. The largest collection of musical literature in the 18th century was owned by Father Martini. It now forms the backbone of the Bologna Museum of Music and Literature. 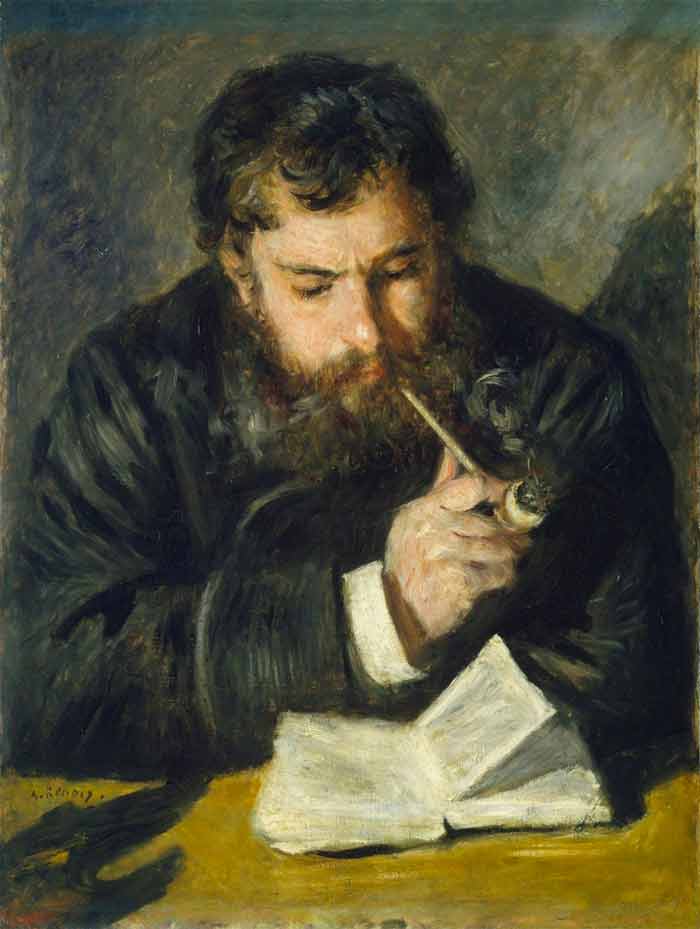 Renoir and Monet After 1862 studied painting together at the atelier of Charles Gler in Paris. Of course, both Renoir and Monet submitted their paintings to the first Impressionist exhibition in Paris in 1874. 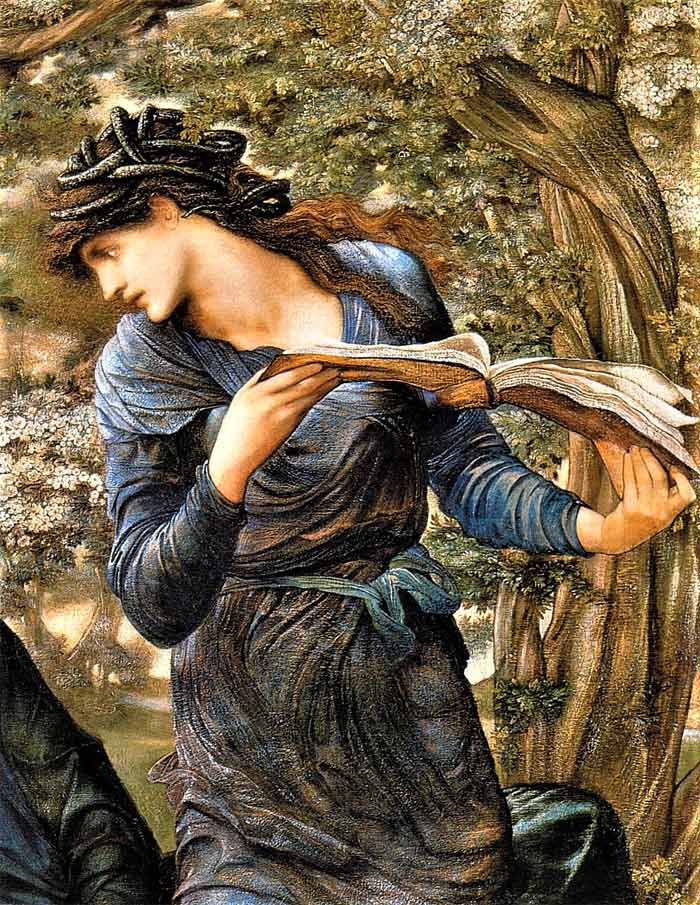 Burn Jones separated from her husband with two children. He falls in love with a Greek beauty, Zambako. They tried throwing themselves into the waterway together, but gave up because the water was cold. The Cupid on the left of the painting shows that Burn Jones regarded Zambaco as the incarnation of Venus. The book in the picture is an ancient Brittany song “The Song of Love”.

Boy with a Book by Jean-Baptiste Peronau (mid 1740s) 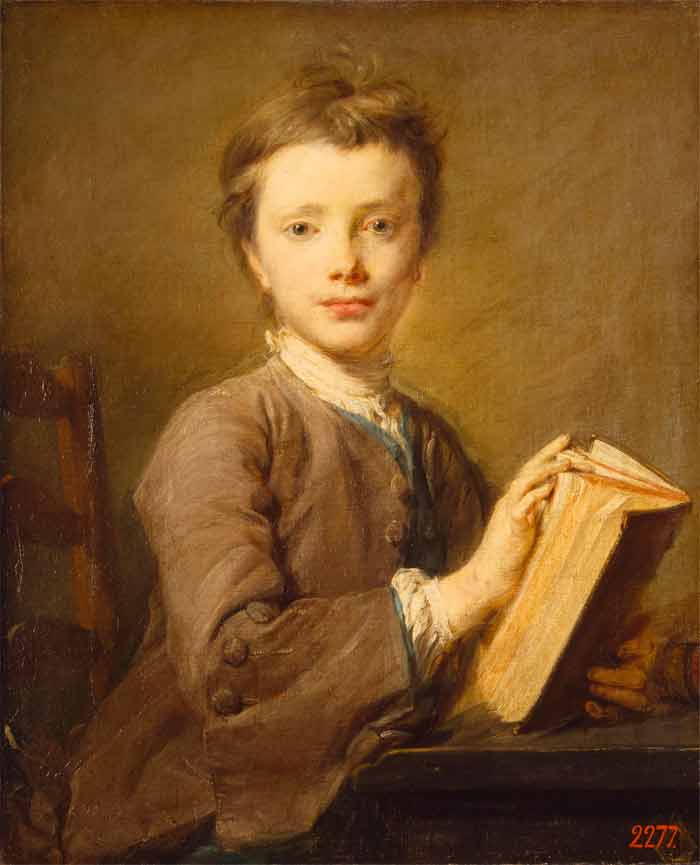 A slender, pale, but bright-eyed young boy is flipping through the pages. It seems like a difficult and lengthy book for a boy to understand properly. Peronau began his oil painting and pastel painting in earnest. When it was presented at the Paris Salon in 1746, the title was ‘Portrait of a Little Boy Holding a Book, the Painter’s Brother’. 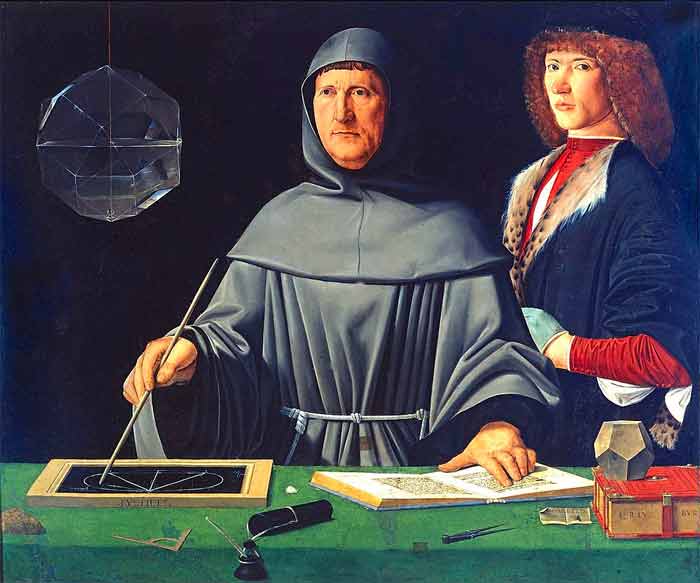 Paccioli, a Franciscan monk and famous mathematician. He opens the textbook of Euclidean geometry with one hand. On the other hand he is holding a pointer and pointing at the planar geometry board. The person next to him is presumed to be Guidobaldo, Prince Urbino, who supported Paccioli. Paccioli was the first to organize double-entry bookkeeping and is also called a pioneer in accounting. 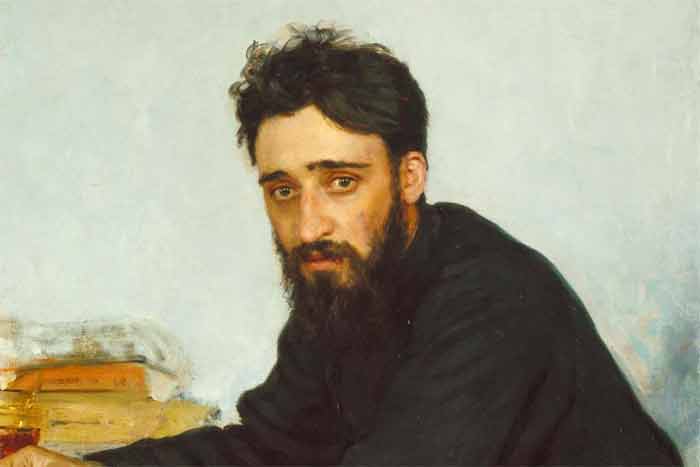 The painter Ilya Repin is regarded as a master of Russian realism in the 19th century. He is also famous for painting many portraits of contemporary Russian artists. He left many great paintings that showed the social image of Russia in the 19th century. The writer Garcin died in 1888 at the age of 33. Suffered from mental illness since childhood. By the time this painting was drawn, he was in and out of a mental hospital. The cause of his death was that he was seriously injured by jumping from a building because he could not stand mental illness. Two anxious eyes and two hands holding a book. 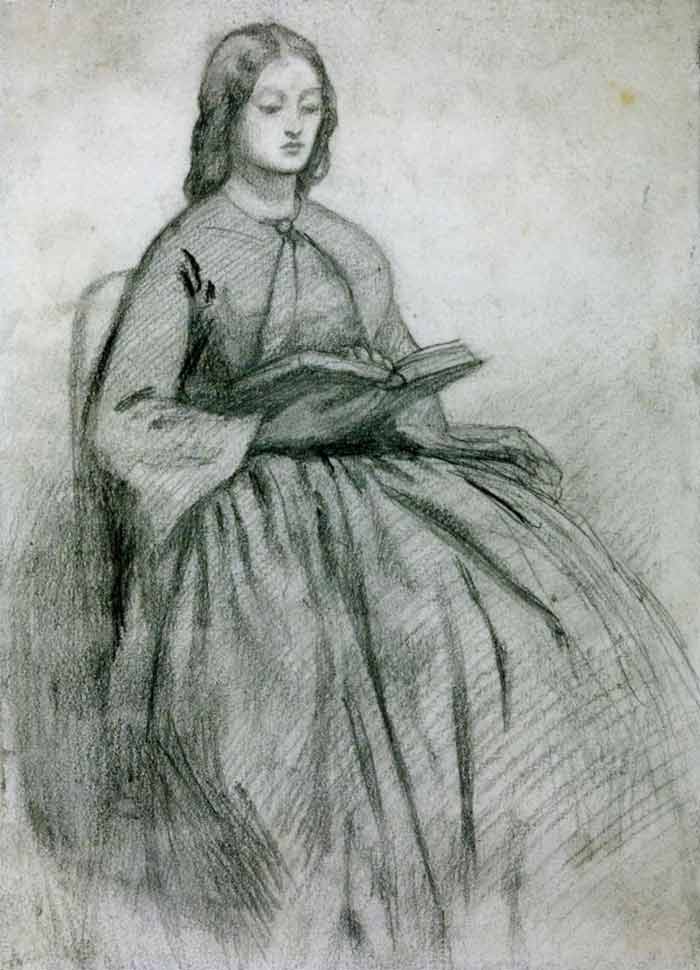 Rossetti married Siddal in 1860, but she died two years later. Rossetti put the manuscript in his wife’s coffin when it was not published. Seven years later, he had a contractor named Charles Howell open the coffin and take out the manuscript. The batch of manuscripts will be calfskin-bound, and the edges will be red. Rossetti asked Howell to keep it a secret. Twenty years later, Howell’s mysterious death was revealed to the world. 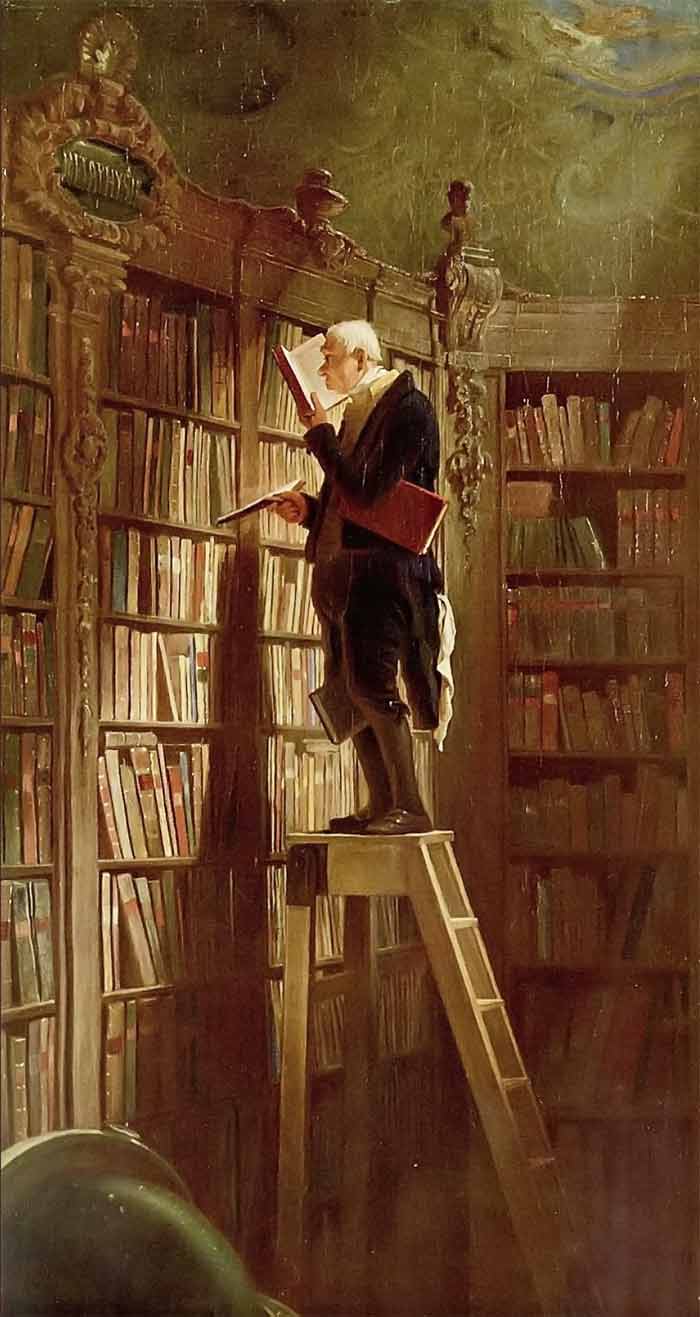