Raja Ravi Verma was one of the most celebrated realistic painters of India. His grand oil paintings of India’s ancient glory, delighted turn-of-the-century India and his mass reproductions through oleograph reached out to the Indian population in an unprecedented scale. He was born on 29 April 1848 – 5 October 1906) was an artist from the princely state of Travancore (now in southern Kerala & some parts of Tamil Nadu).

Ravi Varma belonged to a family of scholars, poets and artists. As only a small boy, he filled the walls of his home with pictures of animals, acts and scenes from his daily life, which though irked the domestics, were noted by his uncle, Raja Raja Varma as the signs of a blossoming genius.

Varma was patronized by Ayilyam Thirunal, the then Maharaja of Travancore and began formal training thereafter. He learned the basics of painting in Madurai. Later, he was trained in water painting by Rama Swami Naidu and in oil painting by Dutch portraitist Theodor Jenson.

Ravi Varma had been using the indigenous paints made from leaves, flowers, tree bark and soil which his uncle Raja Raja Varma prepared for him. His first set of oil paints was brought from Madras after noticing a newspaper advertisement. Excited and nervous, he handled the paints he had waited for a long time. Varma’s next dilemma was learning to paint. This dilemma may seem incongruous more than a century after he started to paint, but the medium was very new and the technique equally elusive in those days.

Only one person in Travancore knew the technique of oil painting – Ramaswamy Naicker of Madura, who, recognizing a potential rival in Varma, refused to teach him the know-how. Naicker’s student, Arumugham Pillai would actually sneak into Moo Dath Madam at nightfall to share his knowledge with Varma, against his teacher’s wishes. This clandestine education was only supplemented by watching Theodor Jenson a visiting Dutch portrait artist who painted the portraits of Ayilyam Thirunal and his wife. Through trial, error and hard work, Ravi Varma worked with the pliable medium, learning to blend, smooth and maneuver the flexibility that was afforded by this slow drying substance.

When Varma himself painted the portraits of this royal couple, this self-taught artist’s blazing talent far outshone the Dutchman! Ravi Varma’s creativity was further fueled by listening to the music of veterans, watching Kathakali, going through the manuscripts preserved in ancient families and listening to the artistic interpretations of the epics. Ravi Varma’s fame as a portrait artist soared with several important portrait commissions from the Indian aristocracy and British officials between 1870 and 1878, and the sensitivity and immense competence this artist still remains unsurpassed. 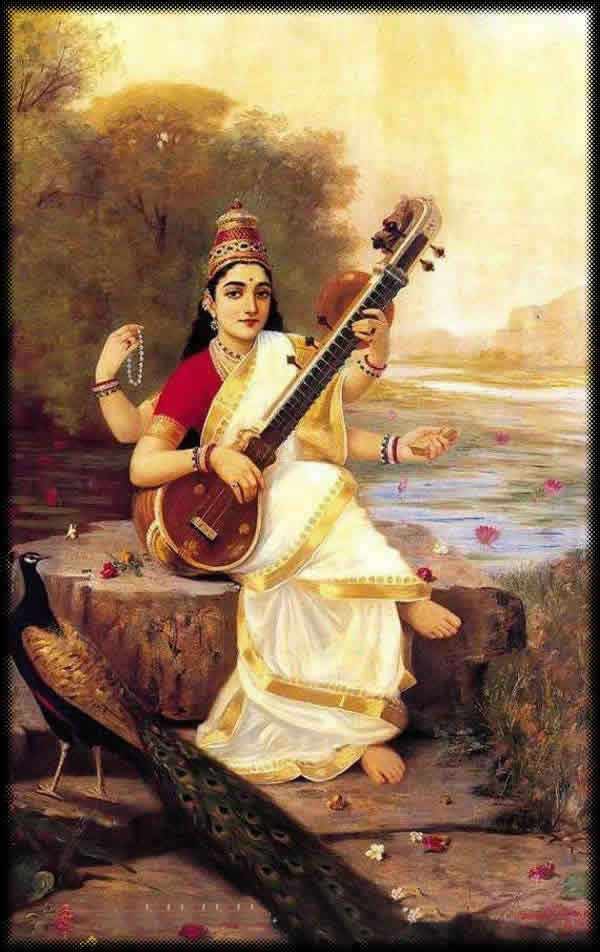 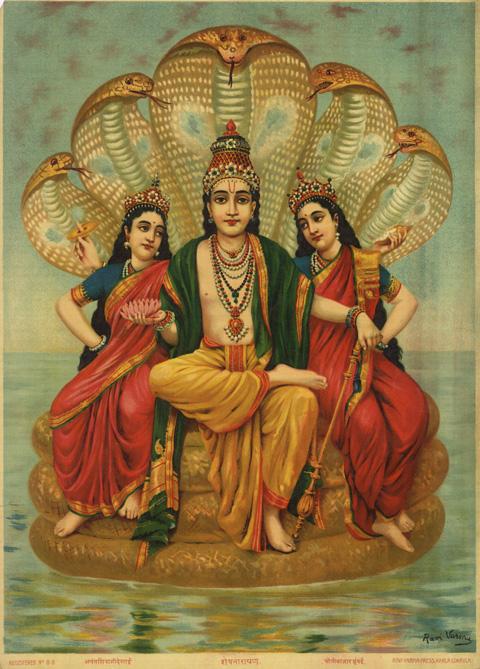 Though several folk and traditional art forms of India since time immemorial subsisted as illustrations for religious narratives, yet, illusionist paintings as a medium for storytelling was Ravi Varma’s invention. He cleverly picked the particularly touching stories and moments from the Sanskrit classics. Though often considered as lacking in overall congruity, by the sheer mastery of painting beautiful areas and expressions, his compositions would enchant the beholder no end.

He was the first man to give faces to the Indian Gods. Before him, there used to be sculptures and miniatures in the pad kathas as the gods as we see them everyday here in India, were visualised by him making him the most powerful influence on the Indian civilization’s culture.The first man who made it possible for untouchables to pray in front of images of Gods, prior to his time, they were not allowed into temples.These Images were pasted outside the temples and monasteries due to which achieved adulation as well as massive recognition for his paintings depicting scenes from Indian literature and mythology including the epics of Mahabharata and Ramayana.

As narrated in the novel “Raja Ravi Varma” by Ranjit Desai, There was a woman called Sugandha Bai who became inspiration for Raja Ravi Varma to paint gods and goddesses as human beings. Once Ravi Varma happened to see this beautiful lady in a temple and suddenly felt inspired. He then sketched Sugandha Bai’s portrait and gifted her. Sugandha Bai got attracted towards Raja Ravi Varma’s sketches and agreed to become his model to portray Hindu Goddesses in his paintings.

Varma’s paintings portrayed sari-clad women in graceful manner, which became an important motif of that time, reproductions being found in many homes.His clever portrayal would add elegance to the personality of the protagonist, like unmasking the fragrance of a flower. The small town of Kilimanoor was compelled to open a post office, as letters with requests for paintings arrived from everywhere.

The recognition that Ravi Varma received in major exhibitions abroad was for the portrait-based renditions, which were meticulous compositions of people, their demeanor and attires.These works finely blended the elements of the early Tanjore custom of painting Nayikas (the feminine emotions being the central theme) and the graceful realism of European masters.

In 1873 he won the First Prize at the Madras Painting Exhibition and he became a world famous Indian painter after winning in 1873 Vienna Exhibition. Though not really qualified for the title of a Raja, when an imperial citation happened to come across in the name of Raja Ravi Varma, the name stuck and stayed.

Varma received widespread acclaim after he won an award for an exhibition of his paintings at Vienna in 1873. Varma’s paintings were also sent to the World’s Columbian Exposition held in Chicago in 1893 and he was awarded three gold medals. He travelled throughout India in search of subjects. He often modelled Hindu Goddesses on South Indian women, whom he considered beautiful. Ravi Varma is particularly noted for his paintings depicting episodes from the story of Dushyanta and Shakuntala, and Nala and Damayanti, from the Mahabharata. Ravi Varma’s representation of mythological characters has become a part of the Indian imagination of the epics. He is often criticized for being too showy and sentimental in his style but his work remains very popular in India. Many of his fabulous paintings are housed at Laxmi Vilas Palace, Vadodara. 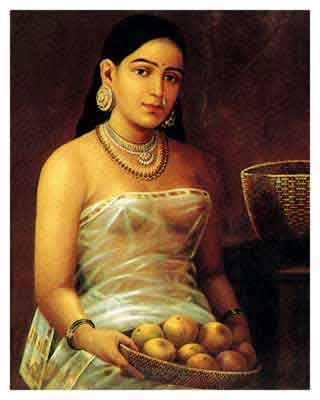 Apparently on the advice of the then Dewan (Prime Minister) of Travancore, T. Madhava Rao, Ravi Varma started a lithographic printing press in Ghatkopar, Mumbai called the Ravi Varma Pictures Depot in 1894 and later shifted it to Malavli near Lonavala, Maharashtra in 1899. Ravi Varma was convinced that mass reproduction of his paintings would initiate millions of Indians to real Art.

In 1901 the press was sold to his printing technician from Germany, Mr. Schleicher and later closed down after it was gutted in an accidental fire. The oleographs produced by the press were mostly of Hindu gods and goddesses in scenes adapted mainly from the Mahabharata, the Ramayana and the Puranas. These oleographs were very popular and continued to be printed in thousands for many years, even after the 1906 death of Ravi Varma. 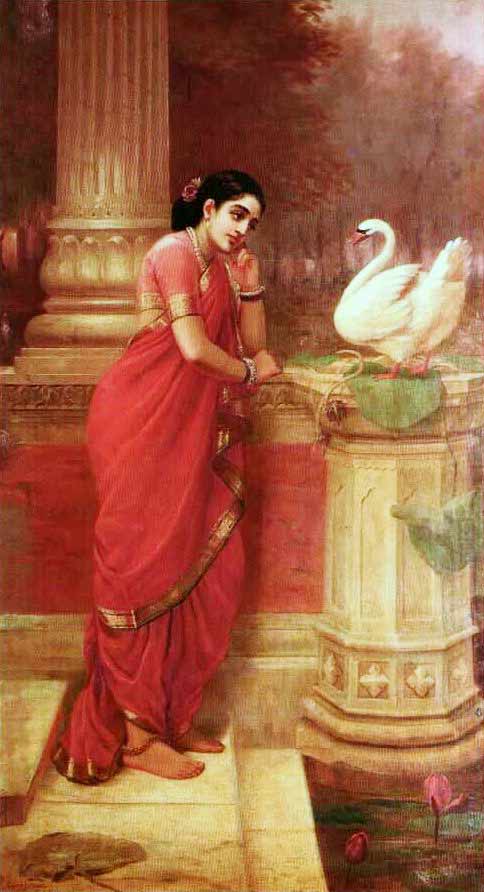 In 1894 and 1888, Ravi Varma and his younger brother C.Raja Raja Varma took a tour around India, in search of images and landscapes for inspiration. On his return from the second tour, Ravi Varma painted a batch of pictures especially for reproduction at his new press, the Picture Depot.

The aristocratic orientalism in his imagery was now replaced by a little more folkish, more iconic and more marketable forms, and also seen was a crises of gender identity of contemporaneous European forms. The Calendar-Art thus brought-forth by Ravi Varma has been the origin of lakhs of gaudy god-pictures by ultramodern litho presses for decades.

In 1904, Viceroy Lord Curzon, on behalf of the British King Emperor, bestowed upon Varma the Kaisar-i-Hind Gold Medal. A college dedicated to fine arts was also constituted in his honour at Mavelikara, Kerala. Raja Ravi Varma High School at Kilimanoor was named after him and there are many cultural organizations throughout India bearing his name.

Raja Ravi Varma died of diabetes on October 2, 1906, in his Kilimanoor Palace home overflowing with friends, relatives, dignitaries and the media. Yet, the rich heritage of the fragrance of his paintings continues to charm and influence the art of India.

In 2013, the crater Varma on Mercury was named in his honor, Considering his vast contribution to Indian art, the Government of Kerala has instituted an award called “Raja Ravi Varma Puraskaram”, which is awarded every year to people who show excellence in the field of art and culture.