One of the most famous women in Christian tradition is Mary Magdalene. Her presence in Jesus’ life has been debated since the beginning. While some people, mainly followers of Christianity, have no doubt that she was a prostitute who Jesus helped and redeem herself to the point that she became a saint, other are not so sure about this narration. There are some people who have said that contrary to the known tale in the bible, Mary Magdalene was in fact Jesus’ wife or that she was one more of his apostles. There is no surprise in the reaction that the Church has towards this declaration. The implications are huge! But, I am not here to talk about Mary Magdalene’s true story. In this article I will explore how the Old Masters have managed to depict her.

From the 14th to the 17th century, Mary Magdalene occupied a privileged position in religious art. Only second to Virgin Mary, Magdalene was interpreted by multiple artists across Europe. Her popularity can be attributed to her relativity, after all, she was just a woman who fell into sin but was able to redeem herself and gain Jesus’ favor. Mary Magdalene’s journey let common people know that even the worst sinners can find a way out. She is represented as a sinner, a reformed prostitute, a miracle worker, a penitent, she is shown in Christ’s Passion and Resurrection’s scenes, and as a saint.

During the Renaissance, the Italian cities were having a real problem with prostitution and took Magdalene to promote a life away of that practice. Titian was one of such artists who painted her as the symbol of redemption. 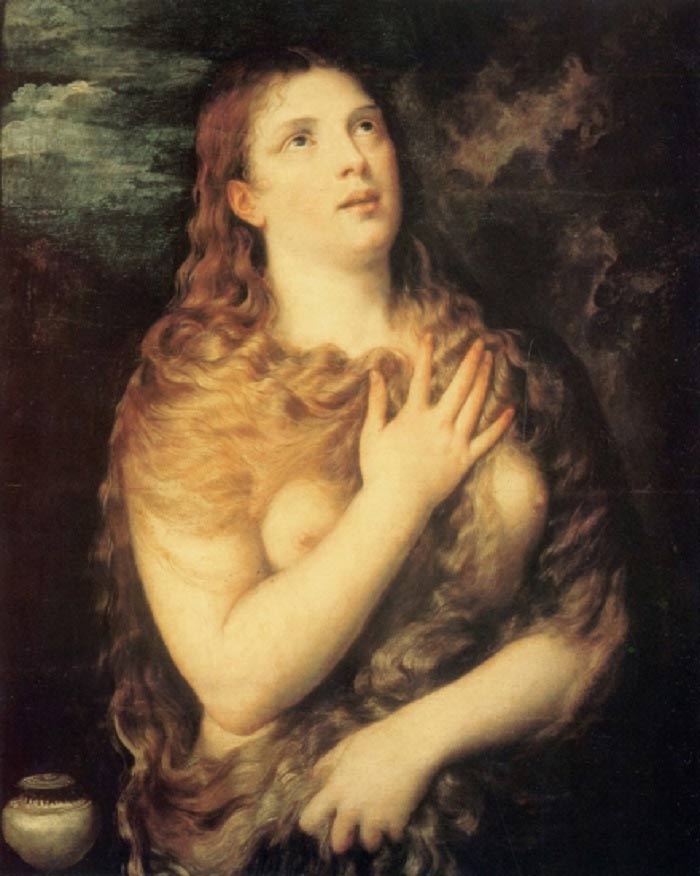 In his works he shows us Magdalene as a penitent. He shows us the moment when she realizes her sinful life and weeps as she looks at the sky. His first Magdalene was painted in 1531, but he returned to it 30 years later. 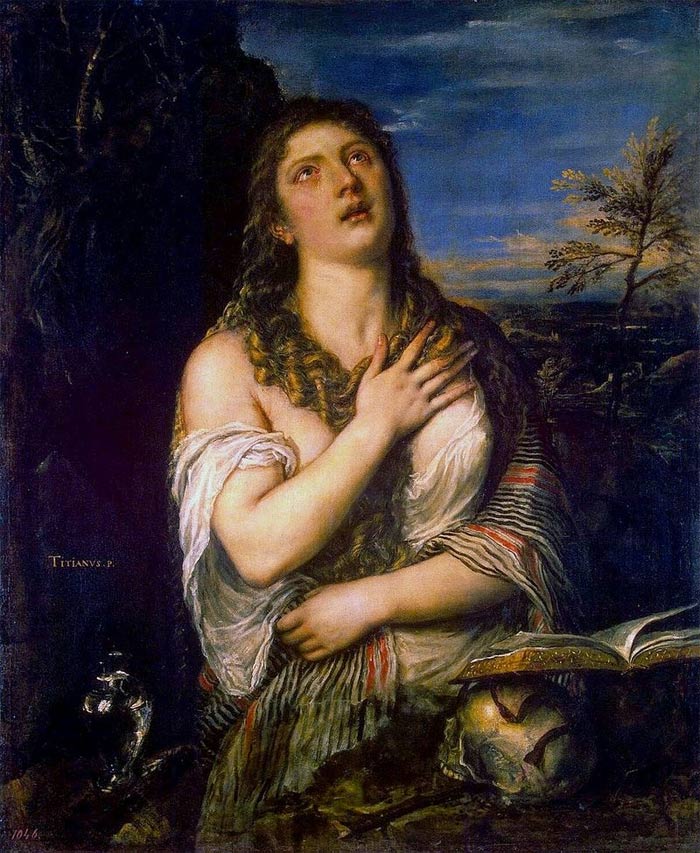 One of the least ordinary depictions of Mary Magdalene was made by the Baroque painter Guido Cagnacci. He was known for the sensuality with which he represented women. 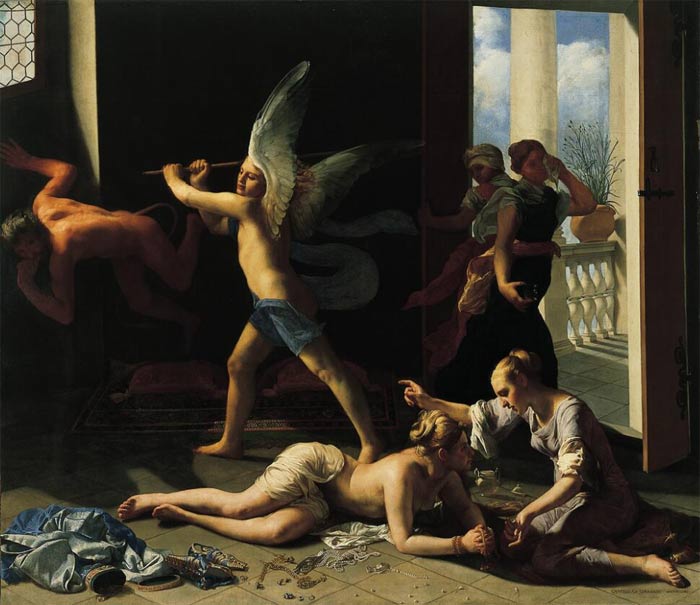 Here we see Magdalene lying on the ground, almost completely naked. With her, there is her sister Martha who urges her to abandon her sinful life and join Jesus. She is pointing at the angel representing Virtue behind them who is pushing out a devil, Vice. Moreover, in third plan, there are a couple of women. One of them is crying while the other seems annoyed, personifications of Contrition and Vanity, respectively. Cagnacci added clothes and jewels on the floor, symbols of Magdalene’s rejection of earthly vices. This is more than just another painting, this is unique and Cagnacci knew it. Unlike other painter who signed with their names following the word “painted” or “made”, he wrote: GVIDVS CAGNACCIVS INVENTOR.

Another very popular way of painting is Mary Magdalene holding a skull. This may seem a very dark representation, but its purpose is to remember or to be aware of our mortality. As Magdalene is shown contemplating the skull, she reflects and makes us reflects on the fact that one day we will be dead, and it would be better if we are close to God. George de la Tour shows Magdalene in a dark room sitting and looking at a mirror, while she places a skull in her laps. 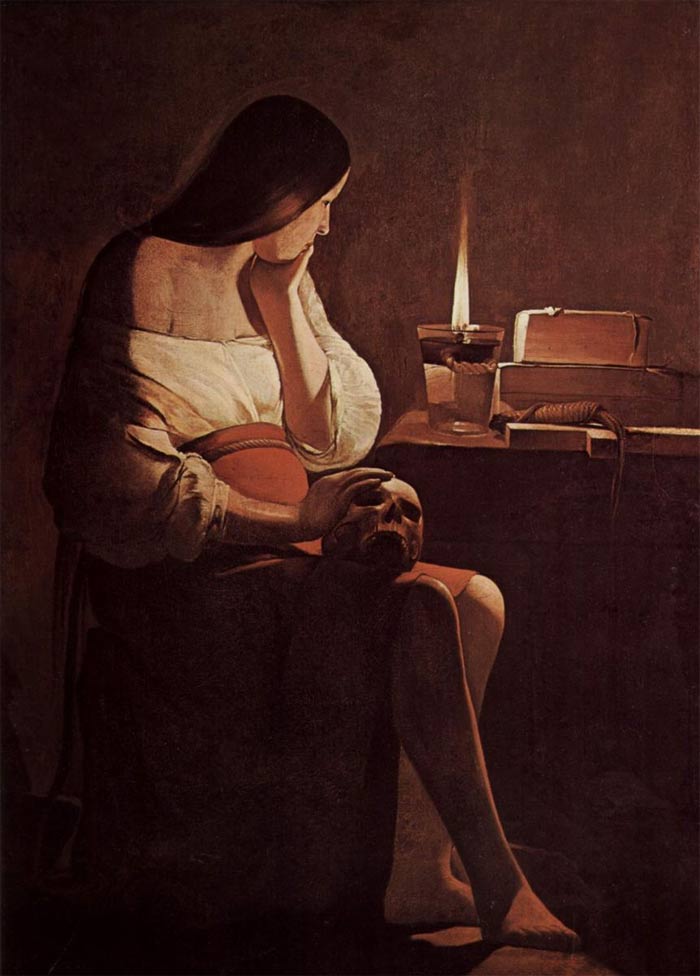 Finally, a recurrent theme in Magdalene’s paintings is Noli me Tangere which means “touch me not”. According to John these are the words Jesus told Mary Magdalene after his resurrection. She was the first person who knew that Christ was not dead. 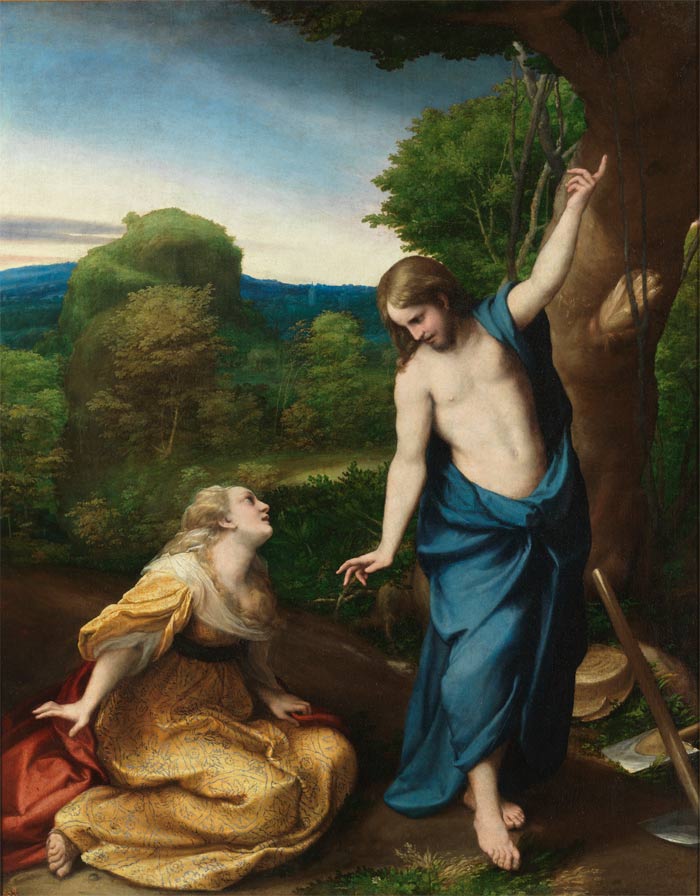 In conclusion, whether you believe or not the story of Mary Magdalene as the Bible tells it, there is no deny that she was important in Jesus’ life. She was one of his main followers and following her death she became this icon of repentance and the possibility of a second chance. She inspired dozens of artists across time and space and still today.