An artist that demanded a tremendous amount out of himself…

José Jiménez Aranda was born in Seville, Spain, on February 7, 1837.

He was known for his plain yet elegant manners and for his fiery temper. He would display a gentle look as he made heartfelt, simple, and precise statements.

When observing a piece of art that he despised, he would make a very scrupulous and witty analysis of the piece, disregarding the creator.

Sorolla spoke of Jiménez Aranda as a Great Master of Art, as well as a gentleman of character and humility, from whom much could be learned, not only in matters of art but of personal conduct as well.

In 1848, when Aranda was 14, his father enrolled him in the Royal Academy of Fine Arts of Santa Isabel of Hungary, located in Seville, Spain, where he would himself teach in his late years. His Tutors were Don Antonio Cabral Bejarano, the patriarch of Sevillian painting and an excellent artist in his own right, and Don Eduardo Cano de la Peña, an innovative teacher who would encourage his students to look for inspiration from life, transgressing the Academic standards of the time.

Jiménez Aranda was not a prodigy; his learning was laborious and intense. He had a certain modest talent for drawing from the beginning,

but the young artist could not yet foresee which direction his art would take.

He spent a long time improving and perfecting his skills, 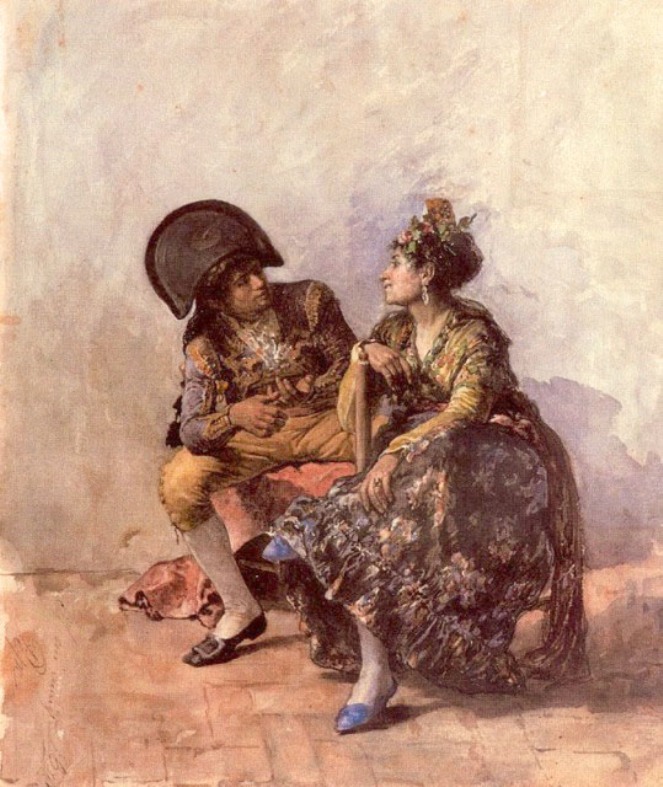 but without declaring his affiliation to any particular style.

In those days, there was a painting genre known as “Casaca” (cloaks) set in the XVIII century. The paintings were deliberately anachronistic, but sold extremely well. 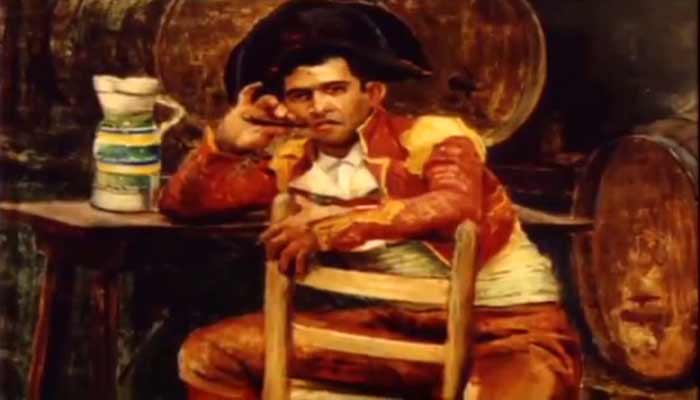 Without intending to do so, Jiménez Aranda gradually embraced this painting style. It required deep knowledge of the fashions, customs, and manners of the previous century. He would soon become a Master in the genre. 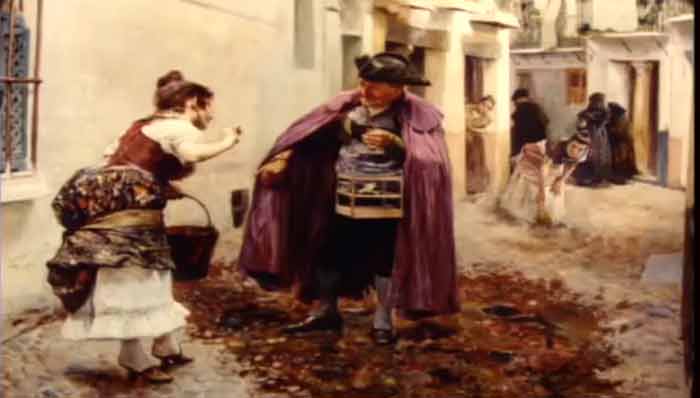 In 1868, Aranda moved to Madrid. There, he had his first contact with the paintings of Goya and Velázquez, which would have a profound impact on him and influence his artistic personality. That same year, he also married.

Having decided to live solely on his Art, he discovered that all artistic media were dominated by closed groups; therefore, he made the brave decision to migrate to Rome with his entire family: his father, mother, wife, two small daughters, brother, and a disciple and friend.