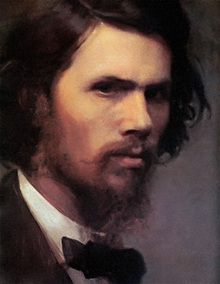 Ivan Nikolaevich Kramskoy (born 8 June 1837) came from humble origins in the town of Ostrogozhsk. He received only an elementary education, but studied and worked in the arts independently. He served as a photographic color corrector from age sixteen, eventually moving to St. Petersburg.

In 1857 he entered into the Arts Academy, impressing his instructors with his drawing skill. He also became a leader of his fellow students, heading protests against the ridiculous pieces the Academy demanded of its artists. After graduation, he helped form a collective called “The St. Petersburg Team,” founded in a spirit of cooperation and spiritual sensibilities.

Kramskoy developed as a portraitist, using skills he developed in his photographic career to draw famous figures throughout the 1860s, like Chistyakov, Morozov, and Shishkin. His accurate but sparing pictures were not only admired among the artistic circles, but also embodied his democratic ideals. It was also at this time (1863-8) that Kramskoy became a teacher at the Drawing School of the Arts.

By the end of the 1860s, the St. Petersburg Team had lost its prestige; although Kramskoy left the group, he soon helped form a group of Realist artists opposed to Academic strictures: the Peredvizhniki. One of the first paintings that he displayed after the formation of this new group was Christ in the Desert, a work several years in the making. Christ in the Desert

A pensive Christ sits alone on a rocky outcropping, contemplating the hardships he would face. Another painting, Laughter, remained unfinished, but depicted Christ’s humiliating journey to Mt. Calvary. Despite the beauty of his understated religious pieces, his greatest fame came from his portraiture. During the 1870s and 1880s, he painted the great men of Russia, including Leo Tolstoy, Petr Tretyakov, and Ivan Shishkin (again). He also captured images of common life, sometimes combining portraiture and and peasantry, as in The Stranger and Inconsolable Grief, showing normal people in the midst of emotional and narrative scenes. He died on 5 April 1887, working at his easel on another portrait.