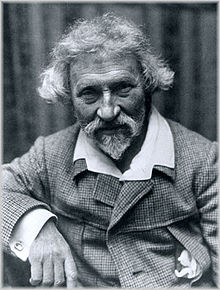 A talented artist from a young age, local icon painters recognized his gifts and took him under their wing. The young man also worked for them, earning enough money to move to St. Petersburg and enter a painting school, from which he ascended in 1863 to join the Academy of Fine Arts.

Despite his personal gifts, he viewed himself as merely lucky, and worked as a house-painter to support himself during his studies.

The most famous painting from his early period, and the one that began his ascent within the art world, was Barge Haulers on the Volga. Inspired by scene he witnessed on Neva River, the painting depicts a collection of men harnessed together, struggling to pull a large ship along the river.

Repin created a Realist masterpiece in this painting, using a muted palette of earth tones and depicting real men (he found actually men with the harried but resolute expressions to model the characters in the painting) rather than sentimentalized caricatures. Barge Haulers sharply divided the opinions of the art world, with some conservative critics condemning the blunt humanity. Repin’s skill, however, was beyond reproach.

He graduated from the Academy in 1871, earning a fellowship to Western Europe to work on another painting, Resurrection of Jair’s Daughter. The next year, Barge Haulers went to the World Expedition in Vienna and Ilya Repin began his studies abroad. While in Paris, he encountered the French Impressionists and found their work lacking in substance and character. His own work abroad, a painting of the Russian mythical figure Sadko, earned him membership in the Academy of Fine Arts, although he soon joined “The Itinerants” (Peredvizhniki) a collective of Realist painters who objected to academic strictures.

After four years abroad, Ilya Repin returned to Chuguevo in 1876 and ultimately settled in Moscow for a time. He was a popular portraitist, working on several at a time as well as historical piece, such as Princess Sophia in Novodevischy Convent. In 1882, he moved to St. Petersburg and became more active with “The Itinerants.” He concentrated on historical paintings, including the remarkable Ivan the Terrible Killing his Son. The Tsar had struck his son’s wife for immodesty, causing a miscarriage. His son confronted him about the assault, and the emperor responded by striking his son in the head, an act of which he immediately repented. This story is fictional and is not based on the historical facts.

The painting shows Ivan the Terrible immediately after the assault, cradling his son’s bleeding head, his frantic eyes staring into the middle distance. The painting, although taking liberties with the historical event, is a profoundly moving character study and highlights Repin’s incredible talent.

Another of Ilya Repin’s most famous historical pieces is the Reply of the Zaporozhian Cossacks. In the 1600s, the Turkish Sultan sent a letter demanding the subservience of the Cossacks. Offended, the Cossacks wrote back a scathing and humorous rebuff to the Sultan.

Repin first heard of this story in 1878, but did not complete the work until 1891. The painting is another masterful character study, showing a raucous band of motley soldiers, gathered around a scribe and laughing as they suggest lines for the response. The emotion and realism of the scene are palpable, in no small part because Repin modelled all of the Cossacks off of real people, much like his earlier Barge Haulers. Indeed, when one person refused to model for him, Repin surreptitiously sketched him so as to include his likeness anyhow.

Repin’s personal life was, unlike his art career, marred by unhappiness. He married in 1872, but was extremely unhappy and divorced her in 1887. He remarried two years later and moved to Finland, an estate called “Penaty” Manor, but around this time he began to suffer severe pain in his right hand. In time, it would rob him of the ability to use his dominant hand, forcing him to work with his left.

Nevertheless, Ilya Repin continued working. He was commissioned to paint the Ceremonial Session of the State Council 1900, by the Russian imperial government, although he was opposed to imperial rule and created paintings celebrating the revolt of 1905. 17 October – The paintings celebrating the revolt of 1905, Ilya Repin

When the Bolsheviks overthrew the emperor in 1917, however, he was equally disenchanted by the cruelty of the new regime and never returned to Russia.

In 1920, Ilya Repin became an honorary member of the Finnish Artists’ Society. He died ten years later, on 29 September 1930.

Ilya Repin was a remarkable figure in art, whose ability and hard work made him one of the most famous Russian artists of his day. The variety in his works earned him the scorn of some contemporary critics, but that expansiveness of thought and ability has made his art a treasure even today.