Ilya Glazunov – The Mystery of the Twentieth Century 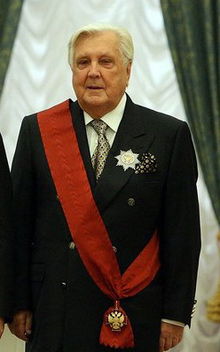 Born 10 June 1930 in Leningrad, now St. Petersburg, Ilya Glazunov was raised in a family that cherished Russian history. Unfortunately, his was one of the families trapped in the city during the Nazi siege of 1942, leaving him an orphan. His uncle helped him escape to Greblo, in Novgorod, where he managed to survive until the siege was lifted in 1944. Although the war left permanent scars upon the young man, he overcame them and entered art school, graduating to the Ilya Repin Institute of Painting, Sculpture, and Architecture in 1951.

As Glazunov developed as an artist, he further embraced his Russian roots. In particular, he found profound inspiration in Russia’s religious traditions, the persecution of which Stalin eased during the war. The comfort found in monasteries and Christian iconography translated into a sense of peace and celebration of the humble in his earliest works.

1956 marked several important milestones for Glazunov. First, he married his classmate, Nina Vinogradova-Benois. Second, he earned first prize at the Youth Exhibition in Prague for a painter honoring Julius Fuchik, a Communist executed by the Nazis during the war for his opposition to Fascism. It shows the grim courtyard of a prison, a group of men shambling about, downtrodden. One face looks up in defiance: that of Fuchik. Despite Glazunov’s boldness in eschewing the realist tendencies in art that enjoyed official sanction, the painting earned him great admiration, even by Soviet critics.

Glazunov’s growing esteem earned him an exhibition in Moscow in 1957, the same year that he graduated. His first submission was The Roads of War.

Drawing upon his childhood experiences, Glazunov depicts a group of civilians and soldiers resting by the side of the road. Despite the striking contrast of their colorful forms with the darkened sky, which at first suggests a relaxing scene, the gloomy aspect of the figures suggests the darker truth. Glazunov’s unglamorous treatment of war created a hostile reaction from the Soviet government; the painting was burned (only surviving now in a copy that the artist made later) and he had to submit less controversial painting, The Birth of a Calf, to graduate.

Following graduation, he was assigned to teach in the small town of Ivanovo, but there were no prospects there. Returning to Moscow, Glazunov and his wife were penniless and homeless. Luckily, a friend let them stay with him until Sergey Mikhalkov, a renowned and well-connected poet, noticed Glazunov and helped him secure lodgings, however meager and dangerous.

Upon the advice of an assistant to Premiere Khrushchev, Glazunov decided to paint more ideologically “Soviet” paintings; however, when he began to study his subjects in Ryazan, rather than cheerful Communist workers he found angry, down-trodden men and a frustrated local leader. This is what he painted. Although it was originally rejected, the truth of his painting was revealed, and the stories that the Kremlin had been told of the successes in Ryazan were found to be false. The deceivers were tried, and Glazunov was praised by the regime for his honesty.

During the 60s and 70s, Glazunov worked prolifically on both personal commission and state-sponsored works. He painted international movie stars, landscapes, and historical paintings. He became even more interested with the myth and history of Russia, creating works that drew upon the rustic and emotional life of the north. The Soviet regime began increasingly to turn to him for political art: he was the only artist willing to travel to Vietnam during the height of the Vietnam War, and when the USSR opened relations with India, Indira Gandhi specifically requested Glazunov to paint her portrait.

1976 saw the creation of one of Glazunov’s most important paintings, The Mystery of the Twentieth Century.

It features many important figures from the twentieth century Russian and world history—Nicholas II, Lenin, Hitler, Einstein—all intermingled with one another, loomed over by the ambiguous figure of Jesus and an atomic explosion. The juxtaposition of the most influential figures and events of the century tried to capture the social, political, and intellectual ferment of Glazunov’s life. The Communist government responded by voting on whether to deport Glazunov. In the end, he was given an assignment in Siberia, ostensibly as a political to paint laborers constructing a railroad but actually to warn punish his independence.

Nevertheless, even the Soviet regime could not squander Glazunov’s abilities. In 1981, he was given the assignment to organize the All-Soviet Decorative Arts Museum, he and his wife did creative work for the Opera and Ballet Theatre in Odessa, and in 1982 an edition of Dostoevsky was published that Glazunov illustrated. This was especially powerful for the artist, because he had always felt a deep interest in and kinship with the famed author. This decade also saw, at least, an exhibition of his once-controversial The Mystery of the Twentieth Century.

Unfortunately, the 1980s also saw severe personal hardships for Glazunov. His wife committed suicide, an even that he could not bring himself to address until 1994’s Our St. Petersburg, showing a Pierrot doll by candlelight, backlit by a gray winter sky.

The silhouette of St. Isaacs Cathedral can be seen in the distance. The painting is melancholy, filled with a gentle sadness that depicts Glazunov’s feelings for his lost wife.

In 1987, Gorbachev reopened the All-Russian Painting, Sculpture, and Architecture Academy that had been closed since the Revolution and set Glazunov as its president, a position that he still holds today.

After the collapse of the Soviet Union, Boris Yeltsin asked Glazunov to redecorate and redesign the interior of the Kremlin, which the artist undertook with all his heart, even getting into a physical altercation with the chief of Yeltsin’s guards.

More recently, he published a book, Russia Crucified, which explained his monarchistic, anti-democratic views of what Russia needs to thrive in the future. He is very close with the modern Russian government, even being named an official representative of President Vladimir Putin.

Vladimir Putin: “Mr Glazunov, let me extend my best wishes to you on your birthday.

Mr Glazunov, 20 years ago you founded this academy, and have served Russian art with good faith and truth for all these 20 years. The history of our Fatherland and the depth of the people’s characters you depict are deftly intertwined in your works. Thank you for your service.”