I have attached two sketches prior to doing an oil painting for my husbands birthday.

The story behind the painting is a legend about Cape Point or the Cape of Storms, as it was often called many years ago. Sometime towards the end of the 17th century, a Dutch ships captain refused to listen to the advise given to him not to take his ship out to sail around the point as a storm was about to hit the peninsular. He refused to listen and sailed from Cape Town to round the point. The weather did turn and he was unable to get around the point loosing his ship and all on board were drowned. The captain was condemned for eternity to keep trying to get his ship around the point. Fanciful sailors have claimed to have seen the ship through the fog in stormy conditions.

My preparation for this painting so far has been studying photographs taken of the view from the sea, of Cape Point. I am unable to get out to sea to see it for myself. I have also gone to Cape Point and sketched it from a side viewing point.

A number of years ago while living in Dublin I was lucky enough to be able to see a number of Turners paintings which enabled me to look carefully at his treatment of the waves. Now I use several books of Turners work to study. Living in Cape Town I have also spent a number of hours studying the movement of the waves in both rough and quiet weather. A couple of weeks ago I went for a walk in Cape Point in a howling South Easter wind which enabled me to experience first hand the fog that is blown in from the sea. It gusts in clearing every now and again giving a tantalizing view of what is around one. 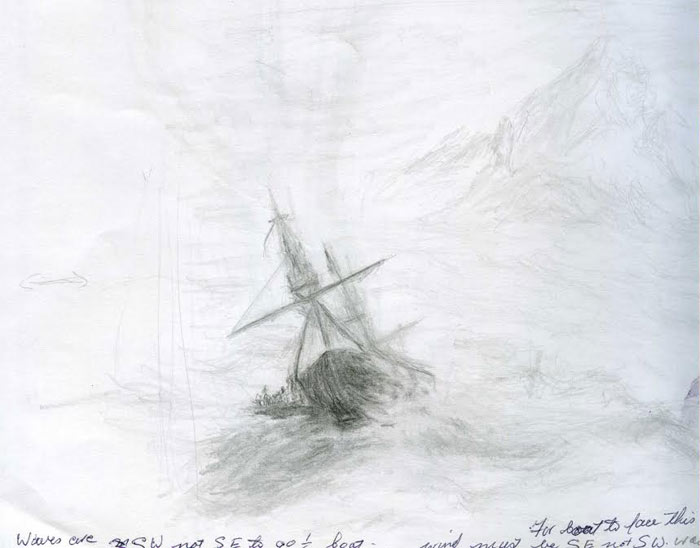 The pencil preparatory sketch was one of several that I decided to work from. They were sketched earlier last year prior to my joining the Drawing Academy. 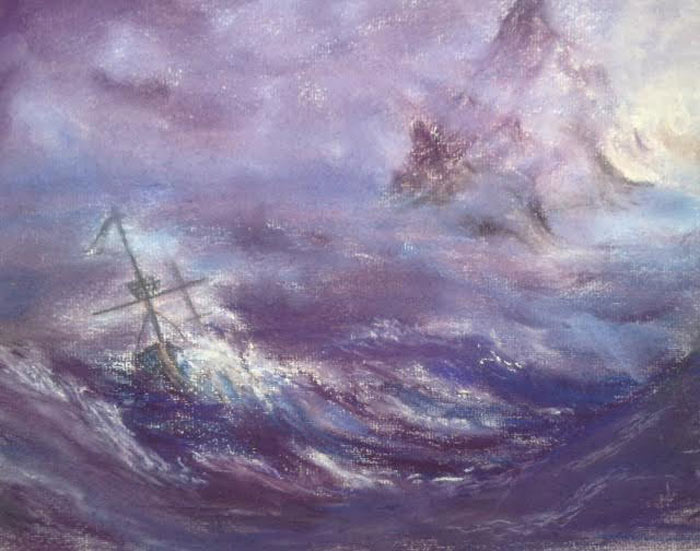 The pastel painting was done to assist with the choice of colour and tone. As I have had to take a photo of the pastel rather then scan it, the colour is not ideal but will hopefully give you an idea of what I have in mind.

Update from Ann one year later

I have at last completed all the Drawing Academy assignments. Thank you very much. Now I must keep drawing as well as painting on a regular basis. You have given me the confidence that I certainly did not have prior to doing your course as well as the knowledge and I feel that I have improved in all aspects of my art. Thank you very much.

I have been working on the oil painting for my husband of the Flying Dutchman. I sent you my preparatory sketches in January last year.

I first did an under painting using Raw Sienna. Once dry I brought in the colour using Ultra Marine, Burnt Sienna, Alizarine Crimson, Indian Yellow and Titanium White. I started with the mountain and ship so that when I started the sky and fog I could ensure that the mountain showed through the fog in places and that it would not appear flat. For the ship I wanted to be sure that it had volume when I painted the wave breaking over it. My choice of colour was to ensure that they could not only mix into the colours that we see here under the Black South Easter conditions but also that they are transparent, except for the white. 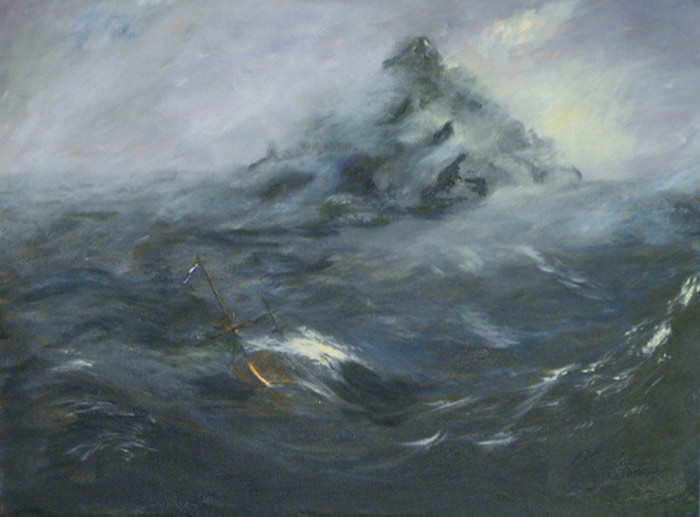