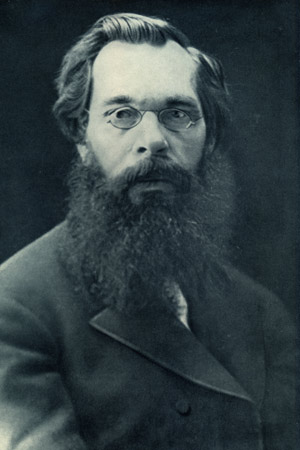 Born 12 May 1830 in Moscow, Aleksei Savrasov demonstrated artistic skills early; indeed, he sold his earliest landscape paintings at age twelve! Although his father wanted him to follow in his footsteps and become a merchant, Savrasov entered the Moscow School of Painting and Sculpture in 1844, focusing on landscapes. His father was so opposed to art school that Savrasov quit after only a few weeks, but was encouraged to return by his instructors in 1848.

Studying under Rabus, he became the most distinguished landscape student at the academy. After he caught the notice of a notable patron of the arts, Likhachev, he received a scholarship to study in Odessa, where he further developed his landscape technique. The paintings made around this time earned him a certificate of appreciation from the art school, and he was able to graduate in 1850.

Still firmly a Romantic painter at the time, Savrasov gained the attention of the Grand Duchess Maria Nikolayevna, daughter of Emperor Nicholas II, and was commissioned to create landscapes for the Russian Art Academy. He moved to St. Petersburg, whose unfamiliar territory revolutionized his understanding of landscape painting. Two of his works from this time, View in the Neighborhood of Oranienbaum and Seashore in the Neighborhood of Oranienbaum, went to exhibition and were so well received that Savrasov earned the title of Fellow of the Academy. In 1855, Savrasov returned to Moscow and became active in his old School of Painting and Sculpture. When his master Rabus died, Savrasov became the school’s landscape instructor, where he was well-liked and influenced future generations of Russian artists. Such was his commitment to education that he later published a book on how to draw landscapes, emphasizing the elements typically found in the Russian countryside. Savrasov also married Sophia Hertz, sister to an art historian and archaeologist of some renown, in 1857.

Encouraged by the Art Amateur’s Society, Savrasov travelled Western Europe during the 1860s. He was astounded by the scope of the International Exhibition in Munich, and heavily influenced by English landscape painting. He had a prolific output during this decade, culminating in his most important piece: 1869’s Elk Island, which earned him first prize at a contest held by the Art Amateurs’ Society. As political and social changes swept across Russia, Savrasov’s house became a salon where the cultured residents of Moscow could gather to discuss art, politics, and life. He also joined the Peredvizhniki, “The Itinerants,” a collection of progressive realists who opposed the strict conservatism of the Academy that eventually formed the Society for Traveling Art Exhibitions.

In December of 1870, Savrasov and his wife moved to Yaroslavl, and later Nizhny Novgorod. There, near the Volga River, Savrasov was inspired by the beauty of the countryside. Thereafter, he divided his working time between the suburbs of Moscow and his new pastoral residence. Early spring was his favorite theme to paint, but he was prolific, and many of his most notable works date to this time of his life.

At this time, Savrasov suffered a devastating loss: the death of his daughter, the third child that he and his wife lost. He spent more and more time outside, trying to forget his pain, which inspired perhaps his most important work, The Rooks Have Come Back. Depicting a fairly insignificant scene of a flock of rooks returning to their roosting grounds, the painting inaugurated a new style of painting, the “mood” or “lyrical” landscape. The painting does not try to evoke passionate response like Romantic paintings, nor does Savrasov capture the immediacy of the moment like Impressionists. Instead, he captures the tone of season: trees just beginning to bud, the snow thinning out as the weather warms, a pool of water free from ice, all united by the key image of the birds to create a poem in oils about the promise of the early spring. The critic, painter, and democratic leader Kramskoy called The Rooks the best painting he had ever seen; it seemed to capture the artist’s soul in a way that no other landscape painter had to that point. Despite the fame that the painting brought, however, Savrasov never abandoned the Peredvizhniki and continued to work closely with its members. One of the closest was Vasily Perov; the two men even collaborated on each other’s paintings, Perov helping with figures and Savrasov with landscapes. After The Rooks, Savrasov experienced a change of fortunes. The death of his daughter prompted him to create more cheerful, optimistic paintings, which earned the scorn of critics. One, Vladimir Stasov, even condemned The Rooks Have Come Back as a meaningless painting showing only a winter landscape. The compounding hardships drove him to alcoholism, and he lost his job and house. His wife took their surviving children and left. Although his friends helped him publish a collection of his illustrations, reminding the world of his true talent, it could not save him from his pain. He spent the remainder of his life a pauper, staying in homeless shelters and being swindled by art dealers who knew they could acquire his paintings at a steep bargain. His deteriorating eyesight only exacerbated his other problems. He lived for a time with a peasant woman, with whom he had two children, but never climbed out of his pit of despair. When he finally died on 26 September 1897, only two men were in attendance: the doorkeeper of Savrasov’s original school, the Moscow School of Painting, Sculpture, and Architecture, and Pavel Tretyakov, founder of the famed Tretyakov Gallery. Despite his loss of stature, his paintings remain as a testament to Savrasov’s brilliance at his peak. He ushered in a new wave of Russian art and is today highly regarded within his craft.